LONDON — The gritty Muslim packed north London neighborhood of Tottenham exploded in violence Saturday night after a young immigrant man was shot to death by police in during a gunfight. 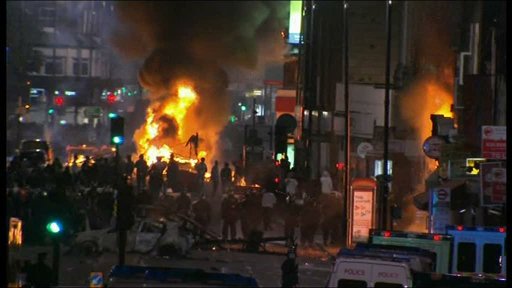 Two patrol cars, a building and a double-decker bus were torched to a crisp as Muslim immigrant rioters clashed with officers in front of the Tottenham Police Station, where immigrants had gathered to demand “justice” with violence and threats for the death of a 29-year-old immigrant man killed in a gunfight.

Sirens could be heard across the city as authorities rushed reinforcements to the scene. In Tottenham shop windows were smashed as mostly what appears to be immigrant residents looted the stores, pushing shopping carts full of stolen goods down the street, beating the merchants and breaking apart ATM machines to steal pounds.

Officers in riot gear and on horseback pushed up against the Muslim rioters. Akinsanya put the number of Muslim rioting at between 400 and 500. Police said there were about 300 people gathered.

Miles from the tourist hotspots of central London, Tottenham is one of the most deprived areas in all of England, with nearly half of all children living in poverty, most are immigrants from third world countries.

In 1985, Tottenham was the scene of a deadly riot after a local woman suffered heart failure when her home was raided by the police. The Tottenham riots were among the most violent in the country’s history, with one officer stabbed to death as he tried to protect firefighters and nearly 60 others were hospitalized.

In Case You Missed It:  YouTube announces new "certification" protocol for videos containing medical information; everything must align with WHO dictates
Posted in Freedoms and tagged Immigration, Riots, United Kingdom.

Neglected news out of the Crazy from the Heat Department is word that the global overpopulists are in a terrific...