Other countries have had downgrades and been fine so why is this different? 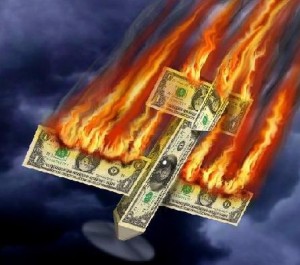 Unlike other sovereign debt downgrades such as europe or japan that have happened, the U.S. treasury securities are unique as a substitute for cash/dollars. No other country is like this, their securities are considered risk investments not cash substitutes. It calls into question the validity of the dollar.

Why is this significant? Because the dollar is the worlds reserve currency. Central banks buy it to back their reserves, but what happens if it becomes a less stable investment? Like any bad investment you dump your holdings.

Let me give you an example: The painter Salvidor Dali never paid for stuff at the end of his life. Why? He just wrote checks that would never be cashed. You see, he used to draw a little bit of art on the back of each check he wrote. Those who received the check never cashed them because they held in their hands an original Salvidor Dali artwork! But what would happen if his art one day had become considered worthless?

All those people would cash all those bad checks and that would bust salvidors overdrafted bank account.

What’s going to happen now is similar. The dollar is about to hyperinflate like the Weimar republic currency of the 30’s. We are about to enter the tall part of the hockey stick on the exponential curve of inflation. Central banks will begin to dump dollars, and the glut of dollars on the market will cause hyperinflation, destabilizing the currency further and sending the U.S. economy into a nose spin leading to further downgrades and further hyperinflation. All those dollars out there are like bad checks, and their about to get cashed and come home. You are worried about the feds running the printing presses? That will be nothing compared to the world central banks being forced to dump Dollar denominated reserves.

This downward spiral will suck the whole world into financial collapse.

So, to answer your question – what does this mean???

A right-wing blogger popular among so-called “anti-jihadist” circles has revealed his true identity in an attempt to distance himself from...