WASHINGTON (Reuters) – The U.S. Postal Service posted a net loss of $3.1 billion in its third quarter and warned again it would default on payments to the federal government if Congress did not step in. 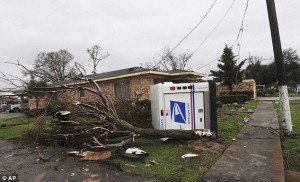 Total mail volume for the quarter that ended June 30 fell to 39.8 billion pieces, a 2.6 percent drop from the same period a year earlier, as consumers turn to email and pay bills online.

The mail carrier, which does not get taxpayer funds, has struggled to overhaul its business as mail volumes fall. It has said personnel costs weigh heavily and is facing a massive retiree health benefit prepayment next month.

“We are experiencing a severe cash crisis and are unable to continue to maintain the aggressive prepayment schedule,” Joseph Corbett, the agency’s chief financial officer, said in a statement.

“Without changes in the law, the Postal Service will be unable to make the $5.5 billion mandated prepayment due in September.”

Congress, which last week ended a vitriolic debate about the U.S. government’s debt levels and budget deficit, is now in recess until early September.

USPS cut work hours during the quarter by 3.1 percent compared to the previous year, when quarterly net losses were $3.5 billion.

The Postal Service said it lost $5.7 billion during the nine-month period ended June 30, compared to $5.4 billion in the same period of 2010.

In its fourth straight year of declines, the agency had a net loss of $8.5 billion for the 2010 fiscal year.

The agency is studying about 3,700 of its 32,000 post offices, stations and branches for possible closure. Officials plan to replace post offices by contracting with private retailers to sell stamps, offer shipping and provide other postal services.

By Aaron Klein It may be early in the campaign season, but the Communist Party USA already has seen fit...