It wasn’t long ago that Hosni Mubarak, the 83-year-old former president of Egypt, was a key, U.S. ally. Nevertheless, last week The Blaze reported on the start of Mubarak’s embarrassing trial while in a cage, over charges of corruption and complicity in the killing of protesters. 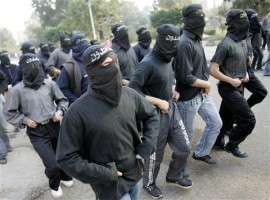 Now, the Muslim Brotherhood that President Obama helped gain influence in Egypt, which critics have long held as a violent and radical group, is calling for Sharia law to govern the punishment that Mubarak and his sons receive for their alleged crimes.

Although the radical political party has branded itself as “moderate,” the most recent recommendations for retribution paint a very different — and a very sinister — more radicalized picture. If found guilty of their crimes, according to the Muslim Brotherhood’s spokesman, Mubarak and his sons deserve to face executions and hand amputations.

“If a man has stolen millions of the state’s money, the penalty is that I must cut off his hand,” said Mahmoud Ghuzlan, a professor of biochemistry at Zagazig University. “There is no argument. These are Allah’s words.” …
Professor Ghuzlan said the penalty of amputation, mandated under Islamic sharia law, should apply to his sons Gamal — the younger, who was being groomed as heir — and Alaa, a businessman, “I must cut all their hands off”.

Perhaps this mentality explains why the Muslim Brotherhood was banned for a half-century in Egypt, finding its way officially back into the political strata following Mubarak’s fall after Obama told him to step down.

Professor Ghuzlan had no sympathy. Mr Mubarak should be hanged if convicted, although “beheading by the sword” would be more traditional, he said. “Then we can hold his head high for all to see, Allah will be victorious”

He sought to paint sharia as a merciful alternative to Egypt’s current legal system, saying a thief who stole only to feed his family would not suffer amputation only lashings.

The advocation of such harsh Islamic punishments comes as the political party held its first open internal elections in decades on Saturday.

This story is particularly concerning, as reports of the Muslim Brotherhood’s radical nature have been rampant. But, as calls for democracy have been ringing in Egypt, the party is being considered as a viable option and could soon have control over Egypt.

In fact, the group may win the largest share of the vote in the nation’s Parliament come election time. And, who can forget the Islamists’ chants during a massive rally at the end of July: “The people want to implement Sharia!” Considering these recommendations and developments, the future may not be so bright for Egypt. But, alas, that depends on the will of the people, which will become more apparent as elections draw nearer.

The folks at the MacIver Institute for Public Policy, a Wisconsin-based free market think tank, have compiled a stunning infographic...