NEW YORK (TheStreet) — The financial system is on the brink of collapse after trillions in bad loans were issued by greedy bankers. If you were a U.S. political figure, would you: 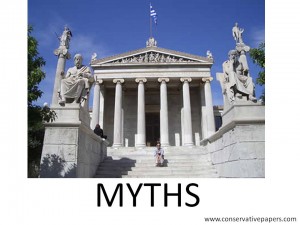 A.) Tell everyone to suck a lemon, and (maybe) let the economy implode.

B.) Fire the bankers who made the bad loans, prosecute the guys who broke the law and guarantee a portion of the loans in a grin-and-bear-it show of good faith.

C.) Reward the bankers who made the bad loans with billions of dollars in bonuses and guarantee every loan with U.S. taxpayer money (with interest, because we borrowed the money from China).

If you answered C, then maybe you should run for office, support laws that funnel billions to insolvent companies, retire from politics and start working for one of the companies you helped bail out. Heck, that’s what former Republican-senator Judd Gregg did (newly hired by Goldman Sachs).

But don’t worry, the revolving door between Wall Street and government is just a “myth”, and here are 10 actual myths that politicians want you to believe:
Yes, quantitative easing is “printing” money. No, it won’t help the economy.

Make no mistake, quantitative easing is a gift to bankers and nothing else. Let’s take a deeper look:

If the Federal Reserve purchases bonds directly from the United States Treasury, they are electronically creating dollars (current obligations) in exchange for future obligations. This is inflationary if the amount of obligations (money) is increasing faster that the amount of capital (goods, services, products and ideas). But the Federal Reserve doesn’t buy bonds from the Treasury, it buys them from “primary dealers.”

Primary dealers are a network of banks (including Goldman Sachs(GS), JPMorgan Chase(JPM) and Citigroup(C)) that are obligated to buy bonds from the U.S. and serve as a trading partner with the Federal Reserve. So Goldman Sachs can buy a bond from the Treasury on Monday and sell it to the Federal Reserve on Tuesday (at a profit) — the blog ZeroHedge has named this game “Flip That Bond.”

Bottom Line: If Americans weren’t already saddled in debt, quantitative easing might work. But as things stand, the Federal Reserve is giving bankers risk-free trading profits and causing food and gas prices to surge (making it even harder for Americans to get out of debt).

Since 1968, the U.S. national debt accelerated fastest under President Ronald Reagan until President Obama claimed this distinction. The national debt does not take inflation into account, so perhaps we should look at inflation-adjusted deficits instead. According to research by Dave Manuel,

A president is not solely responsible for the nation’s deficit, but he does sign the budget into law. And Republicans have put their John Hancock on some really short-sighted budgets while preaching conservatism.

8. President Obama Is an Enemy of Wall Street

When he was on the campaign trail, then-candidate Obama had some tough words for those who repealed Glass-Steagall (the law that prevented banks from acting like hedge funds), calling the process of deregulating banks a “legal but corrupt bargain.” But get a load of this:

President Obama is the best friend Wall Street could have.

7. The Financial System Is Safer Today Than in 2008

The Federal Reserve, which neglected to use regulatory powers to rein in the last crisis, has been awarded more regulatory powers. The majority of “too big to fail” banks are even bigger. And while the government is guaranteeing fewer mortgages through Fannie Mae(FNMA) and Freddie Mac(FMCC), it’s made up the difference by guaranteeing mortgages through the Federal Housing Authority. “Good as cash” money market funds are full of mortgage-backed securities backed by the government (who needs to borrow money to back them up).

Meanwhile, high-frequency trading is alive and well and the causes of the Flash Crash have not been addressed. In fact, the solution of stock-specific “circuit breakers” (the percentage a stock can plummet before it stops trading) will guarantee future crashes. Here’s why:

Having a defined breaking point provides high-frequency traders with an arbitrage window: If they can create an event that causes a stock to temporarily plummet, they can use “sweep to fill” orders (a special type of order used to buy stock rapidly, in small increments) to buy the stock back up to fair value. The size of the circuit breaker limits the size of the profit, but this removes the uncertainty of what trades will be honored or killed.

Washington has always had a spending problem, but since the “Bush Tax Cuts,” we have a revenue problem as well. From 1990 to 2000, U.S. tax revenue had a period of exceptional growth. Following the 2001 tax cuts, revenue plummeted — then recovered — then plummeted again. You can attribute the sustained revenue growth of the 1990s to the fact that the decade didn’t have a recession, but if you expand the timeline to 1965, we’ve had numerous recessions without substantial drops in revenue.

5. ‘No One’ Could Have Seen the Financial Crisis Coming

No one — except for everyone who did. TheStreet has interviewed numerous economists and money managers who have been pounding the table for years.

Author’s Note: I have edited point #4 to remove references to “socialism,” instead, using the phrases: “meritocracy” and “central planning.” As originally written, I confused concepts found within a political system with the system itself.

3. Republicans Are a Bunch of Fat-Cat Millionaires

Well, this is true — but a “half-truth” in the context it is usually told: Both Republicans and Democrats are a bunch of fat cats. The average congressperson is a millionaire, and if you break down the 50 richest members of Congress by political party, here’s the split:

When it comes to political contributions, Wall Street gives both parties lots of love (recently favoring the Democratic party).

2. The U.S. Has the Highest Standard of Living in the World

According to the United Nations’ most recent Human Poverty Index (from 2008), the U.S. standard of living ranks 17 of 19 among developed countries. The ranking is a composite of life expectancy, literacy, long-term unemployment and income equality — while this data is over three years old, it’s not unthinkable that our situation has worsened in the aftermath of the Great Recession.

Charles Hugh Smith makes an excellent case that questions the viability of a debt-fueled U.S. recovery, you can read his article here.
How You Can Fight for the Truth

America is still a great place to live — we’ve just lost our way, misled by Republicans and Democrats alike. If you’re fed up with the way things are and you want to make a real change, don’t buy into the hype around political parties. Political parties are like unions: They do the absolute minimum to keep constituents happy while doing everything they can to raise money and hold on to power.

In the days of the Internet and free-flowing information, there is never a good reason to vote along party lines. Vote for the best man or woman — he or she might be a Democrat, Republican or independent. When people say things that make you uncomfortable, they might be onto something and are at least worth listening to.

Bill Bernbach, one of America’s most innovative businessmen, used to carry a slip of paper in his pocket. It read: “Maybe he’s right.”

In Case You Missed It:  South Africa’s Health Officials Confirm the First Death Linked to the Covid Vaccine
Posted in Financial and tagged Congress, Democrats, Governments.

A major donor to the Democratic Party has received favorable treatment from the Obama administration, including a choice appointment to...