Tripoli, (AKI) – Abdelbaset Ali al-Megrahi, the Libyan convicted for planting the bomb that killed 270 people aboard Pan Am flight 103 over Lockerbie, Scotland in 1988, has escaped together with toppled Libyan leader Muammar Gaddafi, according to the UK’s Daily Telegraph newspaper. 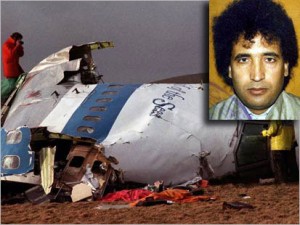 According to witnesses cited by the daily, as soon as rebels entered the capital Tripoli earlier this week, all traces of al-Megrahi’s whereabouts were lost.

The UK on humanitarian grounds in August 2009 freed the convicted terrorist they said would soon die from cancer, that was 2 year ago. He appears to have survived, even appearing in public in a rally to support the regime.

“That man knows too much,” a Canadian doctor who lives close to the villa told the Telegraph. “Gaddafi brought him with him.”

Gaddafi’s government set him up to live in a villa. Some witnesses say al-Megrahi’s wife still resides in the villa.

The search for Muammar Qadhafi has intensified after Libyan rebels seized most of Tripoli. The initial focus was on Qadhafi’s...