Our friends at the invaluable Palestinian Media Watch (PMW-Palwatch.org) have been diligently following the latest in the Palestinian policy of historical revisionism: erasing Jewish connection to the Temple Mount — ginning up energy for the big day at the U.N. 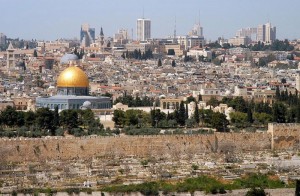 To take but two examples of the “spurious” Jewish attachment to their “alleged” Temple, try this one from Al-Hayat Al-Jadida on August 9.  August 9 is Tisha B’Av, the commemoration of the destruction of the First and Second Temples:

Since Monday morning, groups of extremist Jews have been roaming the courtyards of Al-Aqsa mosque one after the other, under heavy police protection, on the occasion of the so-called “destruction of the Temple”….This Sunday, the occupation’s police handed the shop owners in the Market of the Cotton Merchants…which leads to the blessed Al-Aqsa Mosque, an order forcing them to close their shops on Monday afternoon…in order to facilitate the arrival of the settlers to the Market, for the sake of holding special Talmudic rituals on the occasion of the destruction of the alleged Temple.

Or, from the same Al-Hayat Al-Jadida, on July 1, by its columnist on religious affairs:

The great and exalted Allah commanded the angel Gabriel to place Muhammad upon the riding beast Al-Buraq, which was a cross between horse and donkey. The night journey was both physical and spiritual….Once he reached the Al-Aqsa Mosque, the angel Gabriel removed Muhammad from upon Al-Buraq’s back, and then he tied the beast to the Al-Buraq rock, which was called the ‘Al-Buraq Wall.’ The Jews changed its name to the ‘Wailing Wall,’ because the Jews are always trying to change Arabic names into Hebrew names….

As PMW notes, “the ‘night journey’ mentioned in the Qur’an is dated to 621 CE.  The mosque was built on the Temple Mount by the son of Ummayed Caliph Abd Al-Malik 84 years later in 705 CE.”

And as to the land of Israel:

The Zionists must acknowledge publicly, in front of the world, that the Jews have no connection to the Palestinian Arab land, upon whose ruins arose the colonialist settler Zionist plan that settles and expels, represented by the Israeli apartheid state.  That which occurred two thousand years ago (i.e. the Jewish/Israeli presence in the land)…represents in the book of history nothing more than invention and falsification and a coarse and crude form of colonialism

There is much more at the website, including the claim that the Israelis stole “our clothing, our keffiyeh, our falafel, and our humus.”

And furthermore, because the Palestinians are tired of looking out on “sin and filth (Jews’ praying at Western Wall) … we are drawing our new maps.  When they [Israelis] disappear from the picture, like a forgotten chapter of our city’s history, we will build it anew[.]”

The Arabs’ meretricious propaganda is a relatively modern phenomenon.  Returning to the Qur’an, neither Jerusalem nor Zion is mentioned even once.  Major figures from the Hebrew Bible are co-opted and converted to Muslim prophets, though, and Jews are even instructed to enter the Holy Land “that God has decreed for you” in Sura 5, verse 21.  Sura 17, verse 104 states: “And we [Muslims] said to the Children afterwards [after “we” drowned Pharaoh and his troops] ‘Go live in this land. When the final prophecy comes to pass, we will summon you all in one group.'”  And scholars have seen in  Sura 2, verse 142 ff a repudiation of Jerusalem, though it is not mentioned by name, when Muslims are instructed to change the direction of prayer (qibla) from Syria to the Sacred Mosque in Mecca

So, as Daniel Pipes puts it:

Where does Jerusalem fit in Islam and Muslim history? It is not the place to which they pray, is not once mentioned by name in prayers, and it is connected to no mundane events in Muhammad’s life.  The city never served as capital of a sovereign Muslim state, and it never became a cultural or scholarly center.  Little of political import was initiated there.

Indeed, as Pipes details in a comprehensive essay in Middle East Quarterly (September 2001), with some exceptions, Jerusalem had little or no importance for Islam.  One exception was the Umayyad dynasty (661-750 CE), under whose rule was built “Islam’s first grand structure, the Dome of the Rock, right on the spot of the Jewish Temple.”  Later, “the Umayyads did a most clever thing: they built a second mosque in Jerusalem, again on the Temple Mount, and called this one the Furthest Mosque,” or Al-Aqsa.  Thus, they retroactively turned Muhammad’s “night journey” into a post hoc “reality.”

Nevertheless, in the centuries of Ottoman rule in Israel and Jerusalem, even through its decline into a backwater, “the status quo concerning the Western Wall was preserved,” according to Meir Ben-Dov, et al. in The Western Wall, “and the Wall was classified as the most sacred place in the Jewish religion…standing, as it did, close to the source of Jewish sanctity, the Temple.”  Under Suleiman the Magnificent, writes Ben-Dov, “the Jews were granted legal rights regarding the Wall and a firman was entered in the court archives of the Sultanate in Constantinople confirming the Jews’ status in the area of the Western Wall.”

The following is taken from a 1929 booklet, “A Brief Guide to Al-Haram Al-Sharif [the Noble Sanctuary], Jerusalem”:

The site is one of the oldest in the world.  Its sanctity dates from the earliest (perhaps from pre-historic) times.  Its identity with the site of Solomon’s Temple is beyond dispute.  This too is the spot, according to the universal belief, on which David built there an altar unto the Lord, and offered burned offerings and peace offerings.

The author?  None other than Nazi collaborator and notorious anti-Semite, the Grand Mufti, Haj Amin al-Husayni.

Of course, the numerous archaeological finds dating to the First and Second Temples — those that haven’t been bulldozed and trucked away by the Waqf, the Muslim custodians of the Temple Mount — are shrugged off.  As the current Grand Mufti of Jerusalem, Muhammad Ahmad Hussein, told Aaron Klein, “[t]here was no Jewish civilization in Jerusalem. Many people lived here throughout the ages and they left some artifacts, but so what? There is no proof of any Jews being here. Jews came to the [Temple area] in 1967 and not before.”

Religious Jews have scratched their heads and asked since 1967: “Can somebody explain why the Temple Mount is in the custody of Muslims?”  That is another, very large, story.  Meanwhile, the lamentations continue.

WASHINGTON — The FBI and Homeland Security have issued a nationwide warning about al-Qaida threats to small airplanes, just days...