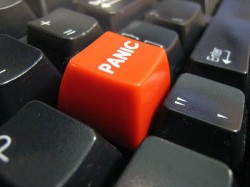 (TheEconomicCollapse) Most of the worst financial panics in history have happened in the fall.  Just recall what happened in 1929, 1987 and 2008.  Well, September 2011 is about to begin and there are all kinds of signs that the financial world is about to hit the big red panic button.  Wave after wave of bad economic news has come out of the United States recently, and Europe is embroiled in an absolutely unprecedented debt crisis.  At this point there is a very real possibility that the euro may not even survive.  So what is causing all of this?  Well, over the last couple of decades a gigantic debt bubble has fueled a tremendous amount of “fake prosperity” in the western world.  But for a debt bubble to keep going, the total amount of debt has to keep expanding at an ever increasing pace.  Unfortunately for the global economy, sources of credit are starting to dry up.  That is why you hear terms like “credit crisis” and “credit crunch” thrown around so much these days.  Without enough credit to feed the monster, the debt bubble is going to burst.  At this point, virtually the entire global economy runs on credit, so when this debt bubble bursts things could get really, really messy.

For example, the yield on 2 year Greek bonds is now over 40 percent.  Investors don’t trust the Greek government and they are demanding a huge return in order to lend them more money.

Throughout the financial world right now there is a lot of fear.  Lending conditions have gotten very tight.  Financial institutions are not eager to lend money to each other or to anyone else.  This “credit crunch” is going to slow down the economy.  Just remember what happened back in 2008.  When easy credit stops flowing, the dominoes can start falling very quickly.

Sadly, this is a cycle that can feed into itself.  When credit is tight, the economy slows down and more businesses fail.  That causes financial institutions to want to tighten up things even more in order to avoid the “bad credit risks”.  Less economic activity means less tax revenue for governments.  Less tax revenue means larger budget deficits and increased borrowing by governments.    But when government debt gets really high that can cause huge economic problems like we are witnessing in Greece right now.  The cycle of tighter credit and a slowing economy can go on and on and on.

I spend a lot of time talking about problems with the U.S. economy, but the truth is that the rest of the world is dealing with massive problems as well right now.  As bad as things are in the U.S., the reality is that Europe looks like it may be “ground zero” for the next great financial crisis.

At this point the EU essentially has three choices.  It can choose much deeper economic integration (which would mean a huge loss of sovereignty), it can choose to keep the status quo going for as long as possible by providing the PIIGS with gigantic bailouts, or it can choose to end of the euro and return to individual national currencies.

Any of those choices would be very messy.  At this point there is not much political will for much deeper economic integration, so the last two alternatives appear increasingly likely.

In any event, global financial markets are paralyzed by fear right now.  Nobody knows what is going to happen next, but many now fear that whatever does come next will not be good.

The following are 25 signs that the financial world is about to hit the big red panic button….

#1 According to a new study just released by Merrill Lynch, the U.S. economy has an 80% chance of going into another recession.

#4 So far, major international banks have announced layoffs of more than 60,000 workers, and more layoff announcements are expected this fall.  A recent article in the New York Times detailed some of the carnage….

A new wave of layoffs is emblematic of this shift as nearly every major bank undertakes a cost-cutting initiative, some with names like Project Compass. UBS has announced 3,500 layoffs, 5 percent of its staff, and Citigroup is quietly cutting dozens of traders. Bank of America could cut as many as 10,000 jobs, or 3.5 percent of its work force. ABN Amro, Barclays, Bank of New York Mellon, Credit Suisse, Goldman Sachs, HSBC, Lloyds, State Street and Wells Fargo have in recent months all announced plans to cut jobs — tens of thousands all told.

#5 Credit markets are really drying up.  Do you remember what happened in 2008 when that happened?  Many are now warning that we are getting very close to a repeat of that.

#6 The Conference Board has announced that the U.S. Consumer Confidence Index fell from 59.2 in July to 44.5 in August.  That is the lowest reading that we have seen since the last recession ended.

#7 The University of Michigan Consumer Sentiment Index has fallen by almost 20 points over the last three months.  This index is now the lowest it has been in 30 years.

The survey’s broadest measure of manufacturing conditions, the diffusion index of current activity, decreased from a slightly positive reading of 3.2 in July to -30.7 in August. The index is now at its lowest level since March 2009

#9 According to Bloomberg, since World War II almost every time that the year over year change in real GDP has fallen below 2% the U.S. economy has fallen into a recession….

Since 1948, every time the four-quarter change has fallen below 2 percent, the economy has entered a recession. It’s hard to argue against an indicator with such a long history of accuracy.

#10 Economic sentiment is falling in Europe as well.  The following is from a recent Reuters article….

A monthly European Commission survey showed economic sentiment in the 17 countries using the euro, a good indication of future economic activity, fell to 98.3 in August from a revised 103 in July with optimism declining in all sectors.

#12 As I wrote about recently, the European Central Bank has stepped into the marketplace and is buying up huge amounts of sovereign debt from troubled nations such as Greece, Portugal, Spain and Italy.  As a result, the ECB is also massively overleveraged at this point.

#13 Most of the major banks in Europe are also leveraged to the hilt and have tremendous exposure to European sovereign debt.

#14 Political wrangling in Europe is threatening to unravel the Greek bailout package.  In a recent article, Satyajit Das described what has been going on behind the scenes in the EU….

The sticking point is a demand for collateral for the second bailout package. Finland demanded and got Euro 500 million in cash as security against their Euro 1,400 million share of the second bailout package. Hearing of the ill-advised side deal between Greece and Finland, Austria, the Netherlands and Slovakia also are now demanding collateral, arguing that their banks were less exposed to Greece than their counterparts in Germany and France entitling them to special treatment. At least, one German parliamentarian has also asked the logical question, why Germany is not receiving similar collateral.

#15 German Chancellor Angela Merkel is trying to hold the Greek bailout deal together, but a wave of anti-bailout “hysteria” is sweeping Germany, and now according to Ambrose Evans-Pritchard it looks like Merkel may not have enough votes to approve the latest bailout package….

German media reported that the latest tally of votes in the Bundestag shows that 23 members from Mrs Merkel’s own coalition plan to vote against the package, including twelve of the 44 members of Bavaria’s Social Christians (CSU). This may force the Chancellor to rely on opposition votes, risking a government collapse.

#16 Polish finance minister Jacek Rostowski is warning that the status quo in Europe will lead to “collapse“.  According to Rostowski, if the EU does not choose the path of much deeper economic integration the eurozone simply is not going to survive much longer….

“The choice is: much deeper macroeconomic integration in the eurozone or its collapse. There is no third way.”

#17 German voters are against the introduction of “Eurobonds” by about a 5 to 1 margin, so deeper economic integration in Europe does not look real promising at this point.

#18 If something goes wrong with the Greek bailout, Greece is financially doomed.  Just consider the following excerpt from a recent article by Puru Saxena….

In Greece, government debt now represents almost 160% of GDP and the average yield on Greek debt is around 15%. Thus, if Greece’s debt is rolled over without restructuring, its interest costs alone will amount to approximately 24% of GDP. In other words, if debt pardoning does not occur, nearly a quarter of Greece’s economic output will be gobbled up by interest repayments!

#20 The head of the IMF, Christine Largarde, recently warned that European banks are in need of “urgent recapitalization“.

#21 Once the European crisis unravels, things could move very rapidly downhill.  In a recent article, John Mauldin put it this way….

It is only a matter of time until Europe has a true crisis, which will happen faster – BANG! – than any of us can now imagine. Think Lehman on steroids. The U.S. gave Europe our subprime woes. Europe gets to repay the favor with an even more severe banking crisis that, given that the U.S. is at best at stall speed, will tip us into a long and serious recession. Stay tuned.

#22 The U.S. housing market is still a complete and total mess.  According to a recently released report, U.S. home prices fell 5.9% in the second quarter compared to a year earlier.  That was the biggest decline that we have seen since 2009.  But even with lower prices very few people are buying.  According to the National Association of Realtors, sales of previously owned homes dropped 3.5 percent during July.  That was the third decline in the last four months.  Sales of previously owned homes are even lagging behind last year’s pathetic pace.

#23 According to John Lohman, the decline in U.S. economic data over the past three months has been absolutely unprecedented.

#24 Morgan Stanley now says that the U.S. and Europe are “hovering dangerously close to a recession” and that there is a good chance we could enter one at some point in the next 6 to 12 months.

#25 Minneapolis Fed President Narayana Kocherlakota says that he is so alarmed about the state of the economy that he may drop his opposition to more monetary easing.  Could more quantitative easing by the Federal Reserve soon be on the way?

Things have not looked this bad for global financial markets since 2008.  Unless someone rides in on a white horse with trillions of dollars (or euros) of easy credit, it looks like we are headed for a massive credit crunch.

What we witnessed back in 2008 was absolutely horrifying.  Very few people want to see a repeat of that.  But as things in the U.S. and Europe continue to unravel, it appears increasingly likely that the next wave of the financial crisis could hit us sooner rather than later.

None of the fundamental problems that caused the crisis of 2008 have been fixed.  The world financial system is still one gigantic mountain of debt, leverage and risk.

Authorities around the globe will certainly do all they can to keep things stable, but in the end it is inevitable that the house of cards is going to come crashing down.

Let us hope for the best, but let us also prepare for the worst.

Obama to Call for Washington-Built Schools in Thursday ‘Jobs Speech’

President Obama will likely call for more education spending in his jobs speech scheduled for Thursday, and it’s anticipated that...