As the nation tunes in to hear President Barack Obama’s “Jobs Speech” this Thursday, it would be instructive to learn how the last bundle of Keynesian billions were spent on those fabled “Green Jobs” that were supposed to save our economy in 2009. 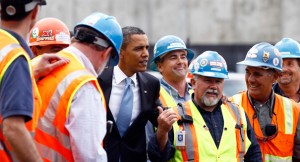 Meet Solyndra, the latest Darwinian example of how not to run a capitalist economy. The President’s magic bullet to save America’s job disaster and help “Win the Future” was to be a whole host of “Green” businesses designed to take advantage of the enormous market demand for solar energy, electric cars and high speed rail.

Of course, since that demand did not actually exist, Obama spent an additional bundle of billions to provide incentives for businesses and individuals to purchase the white elephant products he spent to build.

Solyndra was one of the crown jewels in the President’s plan. He even made a high-profile appearance at the San Francisco factory complete with hard hat tour, and speech to adoring workers who were paid to sit and look thankful for their Green Jobs.

Those workers, 1,000 of them, are all part of the Obama Unemployed now as Solyndra shut its doors and declared bankruptcy.

The green workers got pink slips and no sign of a severance package.

Solyndra shut down because (here’s a big surprise) they couldn’t compete in the market with lower-priced Chinese versions of the same products.

If they had just asked any of their silicon Valley neighbors, they could have saved them a lot of effort.

But as the dust settles on the Solyndra disaster, the real scandal stretches far beyond the President’s failed economic schemes.

As is so often the case in big government, campaign funds and quid pro quo are festering right below the surface of the Solyndra fiasco.

ABC News reports that there is evidence that the White House was personally involved in ensuring that the solar panel start-up received a $535 million dollar loan guarantee from the Dept. of Energy.

The allegation surfaced in a letter House Energy Committee Chairman Fred Upton (R-Mich.) sent to the White House Thursday night, saying he planned to accelerate efforts to understand an investment deal that may have left taxpayers out half a billion dollars.

“We have learned from our investigation that White House officials monitored Solyndra’s application and communicated with [Department of Energy] and Office of Management and Budget officials during the course of their review,” the letter says.

Thursday’s letter, which calls on the White House to turn over correspondence between administration officials, Solyndra and its investors, presents the most pointed suggestion that the White House had direct involvement in the financing.

If the government pays a company to build something and then pays a customer to buy it, then a market doesn’t really exist, and neither does an economy.

But that is what the president has tried to do for the first three years of his presidency.

And the dismal job situation (as well as the stagnant housing market) is proof that a government can’t bribe consumers to purchase something they don’t want.

But maybe this “green jobs” thing has more to do with the past than it does with winning the future.

Solyndra promised to be an example of the politics and economy of the future, but instead might become the best example of the oldest tradition in politics: A political gift paid with your money in exchange for big campaign donation.

How pathetic that Obama, the man who represented a change in politics to so many, winds up being as new and cutting edge as 19th century’s Boss Tweed.

In Case You Missed It:  SoCal: America First Rally in Anaheim Cancelled, ‘We Have a Duty to Call Out Speech That Doesn’t Reflect Our City and Its Values’
Posted in Tyranny and tagged Crime, Energy, FBI, Green, Obama, Stimulus.

On the tenth anniversary of the terrorist attacks in the United States that occurred on September 11, 2001 on the...