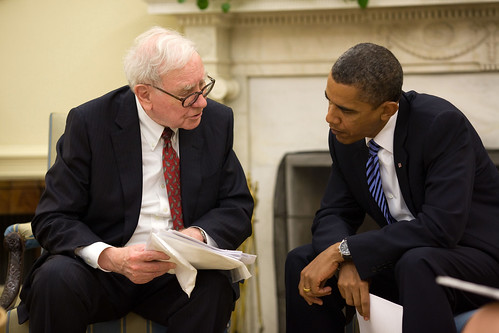 President Barack Obama provided a broad outline of his deficit reduction plan Sunday that includes $1.5 trillion in new taxes through a new tax rate for millionaires and repeal of the Bush tax cuts for Americans couples making more than $250,000 per year. The millionaire’s tax proposal, dubbed the “Buffett Rule” by the White House, will set a minimum tax rate for millionaires in an attempt to ensure they pay the same rate as middle-class Americans.

Republicans responded by calling the proposal “class warfare” that will harm the economy.

“Class warfare may make for really good politics,” he continued, “but it makes for rotten economics.”

Obama has long enjoyed public support from the “Oracle of Omaha,” who last month wrote an op-ed in the New York Times complaining that the nation’s rich had been “coddled long enough by a billionaire-friendly Congress.” Not long after Buffett penned his article in the Times, it was reported that he would host a high-dollar fundraiser for President Obama in New York City on September 15.

But Republican leaders were not impressed by Buffett’s support. Senate Minority Leader Mitch McConnell told NBC’s Meet the Press that if Buffet “felt guilty” about his tax rate, he could always “send in a check….But we don’t want to stagnate this economy by raising taxes.”

As Rep. Ryan noted, Republicans may have an uphill battle fighting public perception over a “millionaire’s tax.” A GOP-aligned polling group found the public supported a millionaire’s tax by a 55-41 margin in December 2010.

Other details of Obama’s deficit reduction plan, as reported by the Associated Press:

Two years ago, as the United States was coming out of the last recession, President Obama was asked how raising...