In New York the, ‘Occupy Wall street’ protest group took to the streets again for the second time in twenty four hours. One section of the demonstration attempted to cross the traffic lanes of the Brooklyn Bridge prompting the police to move in. 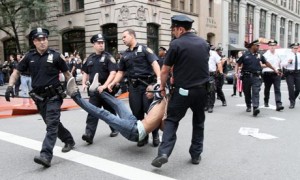 More than 700 were arrested as they brought traffic to a standstill and forced the famous suspension bridge to be closed during the unauthorized march across the span.

A police spokesman confirmed the arrests and said action was only taken after repeated warnings were given to the demonstrators to stay off the traffic lanes and remain on the pedestrian walkway.

The marchers claim their protest was peaceful and the police over reacted in making the arrests.

“They showed up in their riot gear, they showed up swinging batons for no reason, and they just started hand-picking people in the front lines: anybody who was in front who was black or brown was automatically thrown to the floor. If your face was covered with a bandana, or even if you held up a peace sign they were throwing you on the floor,” claimed David Cancino who was on the bridge.

Similar protests were held in other cities in sympathy with the aims of the Occupy Wall Street group who say they are defending 99 per cent of the US population against the wealthiest one per cent.

In Denver the demonstrators marched into the centre chanting, ‘occupy the streets’. The City Hall was the setting in Los Angeles for a peaceful protest. It is understood there were no arrests in these smaller demonstrations.

3,000 protesters were out in Boston during a demonstration against Bank of America’s foreclosure practices at the banking giant’s offices. Dozens were arrested.

Occupy Wall Street spreads to San Francisco as well, hundred of San Franciscan protesters surrounded the Bank of America building in the center of the Financial District, the demonstrators then marched down Montgomery Street to Charles Schwab offices, surrounding the building and baffling employees inside.

Some union members have come out in support of the group which is largely leaderless. As the protests begin to spread it is felt the unions could provide organisational and financial support for the movement.

In mid September Michael Bloomberg said there would be riots in the United States if the White House does not resolve the unemployment crisis in the country. If the unemployment gets any worse we will see major problems.

For Proponents of More Federal Criminal Legislation, Ignorance of the Law Is Bliss

Animal rights activists and commercial fisherman may find little common ground, but both can share their plight as victims of...