CUPERTINO, Calif. (AP) — Apple Inc. said the company’s co-founder Steve Jobs died Wednesday. He was 56. “We are deeply saddened to announce that Steve Jobs passed away today,” the company said in a brief statement.

“Steve’s brilliance, passion and energy were the source of countless innovations that enrich and improve all of our lives. The world is immeasurably better because of Steve.”

Steve Jobs, the demanding visionary who understood before anyone else how deeply we would live our lives through our devices, has died at the age of 56, only weeks after resigning as chief executive of computer giant Apple Inc. for health reasons.

Jobs revitalized Apple by transforming smartphones, computers, and media players into objects of desire. He insisted the company put the human experience first, focusing on design as well as technological prowess. Fifteen years ago,Apple flirted with bankruptcy; today, it is one of the most successful companies on earth. Only oil titan Exxon Mobil Corp. is worth more.

“He taught all of us how to transform technology into magic,” said John Sculley, Apple’s chief executive in the mid-1980s, and the man who once had Jobs kicked out of the company he’d co-founded.

After he was ousted, Jobs endured a decade of exile. But the experience taught him lessons that would, once he returned, help him lead Apple to unimaginable heights of achievement.

“Steve’s big contribution to the computer industry was to take it away from the nerds and give it to the people,” said Bob Metcalfe, co-inventor of Ethernet networking technology and a professor at the University of Texas at Austin.

Jobs was born in San Francisco on February 24, 1955 to Syrian immigrant Abdulfattah John Jandali and Joanne Schieble, both graduate students at the University of Wisconsin in Madison.

In an interview with the New York Post in August, Jandali, now 80 and vice president of a casino in Reno, Nev., said Schieble gave Jobs up for adoption because her father would not allow her to marry him.

But only a few months after the baby was adopted by Paul Jobs, a machinist, and Clara Jobs, an accountant, Schieble’s father died, and she married Jandali. The couple had another child. Jobs didn’t meet his biological sister for more than 30 years.

Jobs attended high school in Cupertino, Calif, the town where Apple would later be headquartered. Graduating in 1972, he went to Reed College in Oregon, but dropped out after one semester. He remained at the a campus hanger-0n for another year, taking the occasional philosophy course. Jobs returned to California in 1974, and took a job at videogame company Atari Inc. After a few months, he resigned and traveled to India in search of spiritual enlightenment.

By 1975, Jobs was back in California, where he was active in a local computer club. The most prominent member was a young man named Steve Wozniak, who had a knack for building homemade computers. Jobs and Wozniak b uilt a prototype machine in the garage of Jobs’ parents, and in 1976, they co-founded Apple Computer. to sell their machines. T

They sold hundreds of the original Apples, but their next machine, the much more capable Apple II, remained in production for 16 years and launched the personal computer industry. 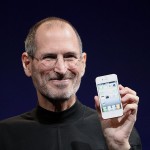 But for a time, it seemed that Apple could do nothing else right. The company’s second computer, the Apple III, was a disaster, plagued by faulty construction. In 1983 came the Lisa, the first personal computer controlled by on-screen icons activated at the click of a mouse, and also a bust.

But in 1984, when Jobs‘s company produced a smaller, cheaper, but elegant computer called Macintosh, it earned Apple a cult following and a reputation for daring, innovative technology.

But sales of the Mac were disappointing, and Apple struggled. The result was a stunning boardroom coup led by Sculley, whom Jobs had personally recruited as the company’s chief executive.

Jobs was stripped of virtually all power over the company he’d created. By 1985, he resigned altogether. “What had been the focus of my entire adult life was gone,” Jobs said 20 years later in a commencement address at Stanford University, “ and it was devastating.”

During his exile, Jobs founded NeXT Computer. Never a financial success–it only sold 50,000 computers–NeXT is remembered for for its terrific technology . But it would be his success in Hollywood that would launch his extraordinary comeback.

In 1986, Jobs bought the computer graphics division of Lucasfilm Ltd., the company owned by Star Wars director George Lucas, and founded what would be Pixar Animation Studios. With Jobs as its CEO,Pixar released Toy Story, the first full-length movie generated entirely by computers, in 1995. The funny, heart-tugging tale made a deep emotional connection with viewers — and $361 million in worldwide ticket sales.

Now for the first time, Jobs, marrying technical excellence with emotional appeal, created a product that was loved by millions around the world. That was the formula that defined Jobs and his companies for the rest of his life.

Meanwhile, a desperate Apple reached out to Jobs for help. Its technology out of date, Apple bought Jobs’ NeXT computer company for $429 million, and used his technology to build the next generation of its own software.

In 1997, when Jobs took the stage before 1,500 Apple devotees at MacWorld Expo at the Park Plaza Castle in Boston, Apple’s sales were dismal, and the company had come within three months of running out of cash. That day, Jobs announced that Apple was getting a $150 million cash infusion – from the despised Microsoft Corp., its nemesis in the software field.

The crowd, packed with Apple sellers and product makers, jeered the news. But Jobs said, “We need all the help we can get.”

That September, he became interim CEO, and the next year, the first product under his reign was launched: the iMac, a self-contained computer and monitor that looked like a TV set from from some brightly colored future. It was the first of a series of spectacularly popular new products; the iPod music player, the iTunes online music store, the iPhone, and most recently, the iPad tablet computer, would all follow its lead.

Nearly every new Apple product was a hit, but not because those products pushed the frontiers of technology. Instead, they featured innovations that made them easy to use and intensely desirable. Companies like Microsoft and Research In Motion Ltd. had been making smartphones for years; they’d never built one as welcoming as the iPhone.

Apple’s extraordinary string of successes was based upon Jobs’ relentless perfectionism. Even the advertising messages displayed on iPhone screens had to be efficient and beautiful, recalled Andy Miller, whose Waltham-based mobile advertising company was acquired by Apple in 2010. “He believed…if you weren’t going to do something special, it wasn’t worth doing,” Miller said.

Presenting new ad designs to Jobs “was like doing a board meeting for the leader of the free world every week,” said Miller, today a partner at the venture capital firm Highland Capital Partners. “You had to be unbelievably well-prepared.”

“Of all the people I’ve done deals with over 20 years now, it was by far the most rewarding and encouarging negotiation I’ve ever participated in,” said Morgan. “Even though he was an incredibly tough negotiator, it was the easiest deal we’ve ever done…he was always straight with me and lived up to every promise he ever made.”

Above all else, there was the constant perfectionism, the fervent attention to every detail of every product. “It was like talking to da Vinci,” Miller said.

It was the loss of this remarkable, relentless talent that stunned the electronics industry when Jobs resigned as Apple’s chief executive in August, and named Tim Cook as his successor. It was well known that he was struggling with pancreatic cancer, but his resignation was still a shock, perhaps because it was so difficult to conceive of an Apple without Jobs at the helm.

No one knows how Apple will fare without Jobs. But however successful the company’s future products, the delightful machines with the stamp of his genius, it’s unlikely that they’ll ever again seem quite so magical.

A Plan to Limit Dishonesty in Congress

Give two U.S. Senators credit for trying to do something about the smoke-and-mirrors games in Washington. The “Honest Budget Act”...