The United States cannot afford to indulge Pakistan’s support for terrorism any longer. The risks of sticking with the status quo are greater than the risks of adopting a tougher approach.

How are insurgents able to continue launching deadly attacks in Afghanistan 10 years into the U.S.-led war there? Part of the blame — perhaps even the bulk of it — lies with Pakistan’s army and its powerful intelligence arm, the Inter-Services Intelligence agency, known by the acronym ISI. 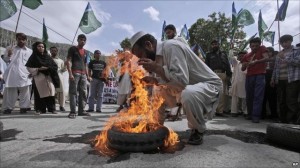 Pakistani Muslims shout Hate Slogans at a anti-US protest in the support of their Army. Pakistan'?s army is partly to blame for attacks in Afghanistan.

For decades, Pakistan has conducted a proxy war in Afghanistan through Islamist insurgent groups that it has created, nurtured and supplied. There is considerable evidence that these groups are managed not by “rogue” ISI elements, as has sometimes been asserted, but by the agency itself. The ISI is a disciplined military institution that answers to the orders of the military command, a point former Pakistani dictator Pervez Musharraf often emphasized. The current Pakistani army chief, army Gen. Ashfaq Kayani, was director of the ISI under Musharraf, and he headed the organization during 2005, when the Taliban began to make a strategic comeback in Afghanistan, operating from protected sanctuaries in Pakistan.

Today, three Pakistani-supported proxy groups are fueling the insurgency in Afghanistan: the Quetta Shura, the Haqqani network and Gulbuddin Hekmatyar’s smaller terrorist group, Hezb-i-Islami. Not one of them has been placed on the U.S. State Department’s official list of foreign terrorist organizations.

Putting these groups on the list would make them subject to a range of U.S. sanctions, and it should be done immediately. There is extensive documentation in the public record — and extensive classified intelligence documentation — of their attacks on American forces inside Afghanistan, including the Haqqani network’s deadly attacks at the U.S. Embassy and NATO headquarters last month. As Adm. Michael G. Mullen, outgoing chairman of the Joint Chiefs of Staff, noted in testimony before the Senate Armed Services Committee recently, the Haqqani network “acts as a veritable arm” of the ISI.

The U.S. campaign against global terrorism cannot succeed as long as Pakistan’s army and ISI continue to support terrorist sanctuaries and training facilities inside Pakistan. The same training camps used to prepare thousands of Afghan, Pakistani and Arab fanatics to cross into Afghanistan also churn out global terrorists like the Pakistani American Faisal Shahzad, who tried to bomb Times Square last year.

Americans need to realize that terrorists’ attempts to strike the United States from sanctuaries in Pakistan will occur again and again unless their bases are closed down. Bombs targeting American cities will inevitably become more lethal with time. Today they are conventional. Tomorrow they are likely to be biological, chemical or nuclear.

Washington has long considered Pakistan an important ally, and so has tread lightly for fear of alienating the nuclear-armed and strategically located country. But it is time to add an “or else” to our dealings with Islamabad.

In the weeks since Mullen’s harsh language before the Senate, members of the Obama administration have sought to soften the rhetoric somewhat. White House spokesman Jay Carney described Mullen’s comments as consistent with U.S. policy but said that he would not have used Mullen’s language. Other officials, speaking on background, said Mullen’s remarks weren’t reflective of U.S. policy.

But there are also indications that the U.S. could be finally ready to adopt a tougher approach. The day after Mullen spoke, Sen. Dianne Feinstein (D-Calif.), chairwoman of the Senate Intelligence Committee, publicly requested “that the State Department take the additional step of listing the [Haqqani] network as a foreign terrorist organization,” noting that the organization “meets the [legal] standards” for this designation. Last week, Secretary of State Hillary Rodham Clinton said the State Department was completing a “final formal review” preparatory to listing the organization. And at his Wednesday White House press conference President Obama warned that “there’s no doubt that, you know, we’re not going to feel comfortable with a long-term relationship with Pakistan if we don’t think that they are mindful of our interests as well.”

These are steps in the right direction, but they don’t go nearly far enough. The George W. Bush and Obama administrations’ “soft” policy of persuasion mixed with bountiful aid and expectations of progress has failed. The U.S. needs to take a much harder stance on Pakistan’s promotion of Islamist terrorism in the region and globally.

Washington has the capability to bring great pressure to bear on Pakistan to encourage it to change course. The U.S. should privately and clearly convey to Pakistan’s army and ISI that it will be compelled to implement escalating measures if Pakistan does not close down the ISI-sustained terrorist sanctuaries in Pakistan. The U.S. should also enlist other nations for regional and global coalitions to contain the terrorism coming from Pakistan. No Muslim government supports the sanctuaries in Pakistan exporting violent extremism. Russia, Saudi Arabia, India, Afghanistan, the Central Asian republics and Western Europe all wish to see them dismantled.

Among other pressures the U.S. can bring to bear are the severance of all military and economic aid, the designation of the three Afghan terrorist organizations as foreign terrorist organizations, the naming of Pakistan itself as a state sponsor of terrorism and the declassification of information exposing the terrorist bases in Pakistan and the ISI’s involvement in them.

Pakistan has hinted lately that it would turn to China and Iran if the United States ramps up pressure. But neither China nor Iran would like to see a Taliban government return to Kabul, nor would they wish to spend the huge sums it would take to shore up Pakistan’s listing economy.

The Obama administration needs to implement a Pakistan policy that serves America’s national security interests. It must be constructed for the long term and be responsive to Pakistan’s actions. There should be incentives employed to encourage the dismantling of terrorists organizations that the ISI has created and sustained. And there should be consequences if it does not.

The United States cannot afford to indulge Pakistan’s support for terrorism any longer. The risks of sticking with the status quo are greater than the risks of adopting a tougher approach.

Peter Tomsen is the author of the just-published “The Wars of Afghanistan.” He was U.S. special envoy and ambassador to Afghanistan from 1989 to 1992.

Obama Administration to be Issued Subpoenas

WASHINGTON (AP) — The chairman of the House oversight committee said Sunday that he could send subpoenas to the Obama...