(NY Post)  A low-performing Manhattan high school that was granted up to $6 million in extra funds to undergo a “transformation” has found the secret formula for success: Dumb down the requirements for students to pass. 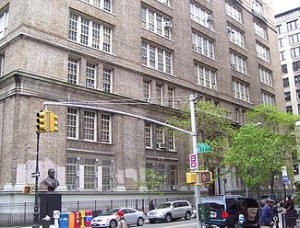 At Washington Irving HS, near Union Square, administrators have approved new grading policies that give failing kids credits toward graduation.

The policies — which one expert blasted as “approved cheating” — are spelled out in documents obtained by The Post, including the 2011-12 staff handbook and minutes of a meeting last October between Principal Bernardo Ascona and assistant principals who make up the school’s Panel for Academic Success.

* Students who get failing scores of 50 to 55 in class will “automatically” get 15 points for a passing 65 to 70 grade if they pass a Regents exam. Kids who score a minimum 65 on the Regents “should receive a passing grade” in the class. The same practice forced a Bronx principal to resign.

* Students who fail a class “will be assigned … a work product not to exceed five pages” or “alternative project.” Livid teachers say pupils who cut class or blew off studying get a “packet” of work or take an online multiple-choice “credit recovery” program.

“The message is loud and clear: Don’t worry if you don’t attend school — we’ll just give you an easy way to make up the credit,” a staffer said. “What does that say to the kids who actually do the class work, tests, projects and homework?”

David Bloomfield, an education professor at Brooklyn College, said such policies make a mockery of “real learning and subject mastery.”

“This is simply a phony process for getting kids undeserved credits,” he said.

Ascona would not answer questions about the policies.

The city Department of Education said officials will review the school’s grading practices. The DOE is auditing 60 unnamed schools to look for lax scoring and credit-granting.

Struggling schools like Washington Irving — which serve many low-income, English-learning and special-needs students — are under the gun to boost their numbers or else face closure.

At Lehman HS in The Bronx, Principal Janet Saraceno resigned in August after a probe by schools investigator Richard Condon found she improperly changed grades and gave credits to some 30 students who had failed their classes but barely passed Regents exams. She broke a DOE rule that a Regents score can make up no more than 33 percent of a final class grade, Condon found. The DOE gave Saraceno a new job, with the same salary, as an “achievement coach.”

Washington Irving is one of 12 city schools chosen to each get federal grants of up to $2 million a year for three years to “transform.”

The school — which boasts Joy Behar and late actress Claudette Colbert among its alumni — barely escaped the DOE’s ax by claiming a dramatic boost in its four-year graduation rate. It reported a 55 percent rate last year — still below the citywide average of 63 percent but up from a dismal 38.3 percent the year before.

But just 5 percent of last year’s seniors were considered “college or career ready” based on their Regents exams, records show. 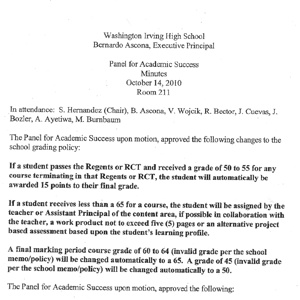 Excerpts from the minutes of a meeting of Washington Irving HS's 'academic success' panel: "

In Case You Missed It:  Trump Supporters Raise over $100K to Save AOC's Abuela's Ancestral Home
Posted in Financial and tagged New York.

The United States cannot afford to indulge Pakistan's support for terrorism any longer. The risks of sticking with the status...