Details the shady history of the shady Islamic supremacist behind the Ground Zero mosque: “This lowlife has defaulted on two bank loans, hasn’t paid his back taxes, was busted for prostitution. Gamal not only beats people up and threatens Muslims who speak out against the mosque, but he is also a tax cheat, owing a quarter of a million in taxes while defaulting on not one, but two bank loans. All this while being evicted from his Soho offices for non-payment of rent.”

“Con Ed says it will evict Ground Zero mosque unless developer pays $1.7 million in back rent,” by Isabel Vincent and Melissa Klein for the New York Post” 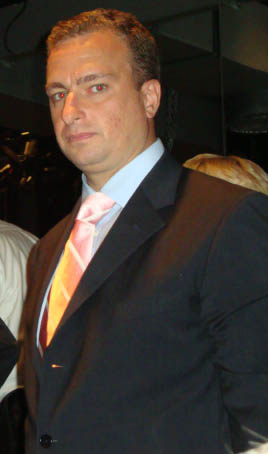 Pay up or get out.

Con Ed has given the Ground Zero mosque an ultimatum: Pay the $1.7 million you owe in back rent, or we’ll terminate your lease and take back our property….

Park51, which leases the substation from Con Ed, wants the two buildings so it can knock both down and build a $100 million, 15-story community center.

When the mosque failed to fork over the $1.7 million, the utility fired off a letter demanding the money by Oct. 4 and threatening to evict.

“Whether it is bowing to political pressure or seeking to retain the valuable premises for itself, Con Ed appears intent on proceeding with its wrongful termination,” argued Sharif El-Gamal, the lead Park51 developer.

Gamal said Con Ed’s move also wipes out his ability to eventually buy the substation building, where the Park51 developers have converted the first floor into a prayer space. They turned the first floor of the adjoining building into a cultural center and recently debuted their first event, a photography exhibit.

The modest space is in sharp contrast to the expansive plans unveiled last year that generated worldwide controversy for their proximity to Ground Zero.

The deal was considered a bargain as the entire property had been on the market for $18 million only a few years earlier.

The lease with Con Ed included an option to buy, which Gamal said in 2010 that he wanted to pursue. If he doesn’t own the Con Ed property, he would have to get any demolition approved by the utility.

After conflicting appraisals of the property by Gamal and Con Ed, it seems both sides came to an agreement this summer.

Court papers show that the appraised price for the Con Ed property is $10.7 million. But Gamal contends Con Ed’s math was faulty when it calculated the rent, saying it owes only $881,519 in back rent and should have to pay $25,875 a month going forward….

Should We Re-enact Glass-Steagall?

(Examiner) The repealing of the Glass-Steagall Act was heralded as one of the greatest bipartisan achievements of our time. It...