I am looking at a reproduction of an engraving of Jerusalem’s Church of the Holy Sepulcher, said to the be the site of Jesus Christ’s Crucifixion and burial. The church in this image, based on an 1856 photograph, has neither cross nor belfry. It stands in compliance with the Islamic law and traditions of the Ottoman (Turkish) Empire, which ruled Jerusalem at the time. 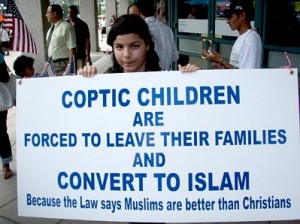 I mention the engraving for a reason. It relates to last weekend’s massacre of two dozen Coptic Christians in Cairo by Egyptian military and street mobs. The unarmed Copts were protesting the destruction of yet another church in Egypt, St. George’s, which took place in Elmarinab following Friday prayers on Sept. 30. The trigger was repair work on the building — work the local authorities had approved.

Does that explanation make sense? Not to anyone ignorant of Islamic law. Unfortunately, that criterion includes virtually all media reporting the story.

Raymond Ibrahim, an Islam specialist, Arabic speaker and author of “The Al Qaeda Reader,” catalogs the events that turned a church renovation project into terror and flames.

With work in progress, he writes online at Hudson, N.Y, “it was not long before local Muslims began complaining, making various demands, including that the church be devoid of crosses and bells — even though the permit approved them — citing that ‘the Cross irritates Muslims and their children.’ ”

Those details reminded me of the de-Christianized 19th-century-image of the Church of the Holy Sepulcher — no cross, no bells. It becomes a revealing illustration of Islamic history repeating itself in this Shariah Autumn, the natural harvest of the grotesquely branded “Arab Spring.”

Given our see-no-Shariah’ media (and government), we have no context in which to place such events. That context is Shariah society, advanced (but not initiated) by the “Arab Spring,” where non-Muslims — “dhimmi” — occupy a place defined by Islamic law “under terms of surrender as laid out in the ‘dhimma’ pact.” 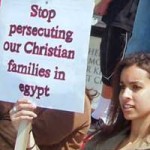 So writes theologian, author and Anglican pastor Mark Durie at markdurie.com. Such terms, Durie writes, “can be found laid out in countless legal textbooks.” When non-Muslims violate these terms, they become subject to attack.

To place the dhimmi pact in comparable Western terms is to say the West has its Magna Carta, Islam has its Pact of Umar. Among other things, this seminal pact governing Muslim and non-Muslims relations stipulates, Durie notes, the condition that Christians “will neither erect in our areas a monastery, church or sanctuary for a monk, nor restore any place of worship that needs restoration.”

Thus, this anti-Coptic violence, for the moment under world scrutiny, is Islamically correct. Westerners fail to grasp this fact. But Durie lays out the theological steps:

“For some pious Muslims in Egypt today, the act of repairing a church is a flagrant provocation, a breach of the peace, which amounts to a deliberate revocation of one’s right to exist in the land.”

As such, it “becomes a legitimate topic for sermons in the mosque [where] the faithful are urged … to uphold the honor of Islam.” In Islamic terms, then, it becomes “a duty to destroy the church and even then lives of Christians who have the temerity to repair their churches.”

Meanwhile, dhimmi who protest the Islamically just church destruction “are also rebels who have forfeited their rights [under the pact] to ‘

‘safety and protection.’ ” As violators of the “dhimmi” pact, they become fair game.

It’s simple, but the theology eludes us. Why? To expose the facts about Shariah in the Western milieu is to invite their criticism. Such criticism is forbidden under Shariah. So, we remain silent — something all good “dhimmi” do.