Prime Minister Binyamin Netanyahu welcomed Shalit back home from captivity Tuesday and vowed, “We will continue to fight terror. Every terrorist who returns to terror will have a price on his head.” 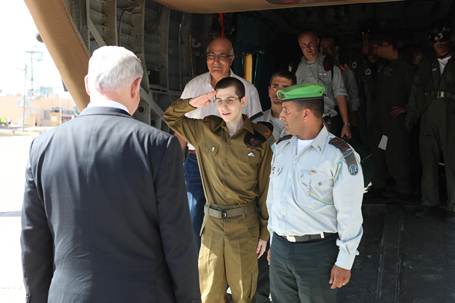 He added, “Gilad has returned home and is back with his family, his people and his country,” the Prime Minister stated.

After meeting Shalit on the airplane that brought him to the Tel Aviv area Tel Nof base, Prime Minister Netanyahu escorted him to his parents, Noam and Aviva, who have been campaigning for more than five years to bring their son back home, regardless of the price.

“All of us are united with happiness and pain,” Prime Minister Netanyahu said. He explained that the decision to free 1,027 terrorists, including dozens serving hundreds of life terms for murder, was very difficult.

“I faced the need to bring home someone who was sent to fight for Israel….I always knew that if I and my friends were to fall into captivity,  the government and the IDF would do everything they could to return me home…”

“I also faced another need – to minimize as much as possible the dangers to Israel. I achieved two results – to leave some terrorists in jail and to deport terrorists outside of Judea and Samaria.”

“Hamas for years has opposed this deal, but we received signs the past few months that they were ready to agree…When they accepted our basic demands, I had to decide.”

“It is difficult to see terrorists who murdered Israelis freed from prison [but] this was the best agreement we could achieve. Otherwise, Gilad might disappear and…I did not want his fate to be that of Ron Arad, who fell into captivity 27 years ago.”

Prime Minister Netanyahu also quoted from the section of Isaiah that will be recited this Shabbat. HaShem reminds the prophet that his life’s purpose and duty is to arouse the Jewish people to return to being a light unto the nations, “To open blind eyes, to bring prisoners out of a dungeon; those who sit in darkness out of a prison.”

The “Occupy Wall Street” crowd may be dramatically out of step with the American electorate, but Big Labor likes what...