The Occupy Wall Street movement is no stranger to controversy. The protests have drawn extremists and radicals of various stripes, from labor union members, to far-left Democrats, and members of various communist and socialist movements. As reportedearlier by The New American, the movement has even been home to several high-profile anti-Semites, who, like their statist intellectual heroes Marx, Keynes, and Proudhon, blame their woes on perceived Jewish involvement in free-market capitalism. However, an analysis of the movement also reveals deep-seated connections between its Marxist members and radical Islamist groups, a classical example of the Islamo-Communist connection identified on many occasions as fueling the “Arab Spring” protests. 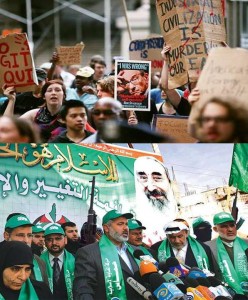 The organizers of the protests are the first to admit that they are directly inspired by the protests raging across the Arab world, which began last winter in Cairo, Egypt’s Tahrir Square, and are informed by the “revolutionary Arab Spring tactic to achieve our ends.” Protesters are told to “Stand, Walk, and Unite like Egyptians,” and are told to wait for their “Tahrir moment.” Just as the protests in Egypt and elsewhere across the Middle East are orchestrated by the collusion of various Leninist, Trotskyite, and socialist parties with the Muslim Brotherhood and al Qaeda, their American incarnation also involves the radical left collaborating with various Islamist subversives.

Many leading leftist “intellectuals” have identified the protests as an “American Autumn” response to “Arab Spring.” Cornel West, a board member of the Democratic Socialists of America and leading Marxist ideologue, stated in an interview with Amy Goodman (host of the communist-backed radio show “Democracy Now”) that he perceives the movement as one that will usher in a global socialist revolution:

In the end we’re really talking about what Martin [Luther] King would call a revolution; a transfer of power from oligarchs to everyday people of all colors, and that is a step-by-step process. It’s a democratic process, it’s a non-violent process, but it is a revolution, because these oligarchs have been transferring wealth from poor and working people at a very intense rate in the last 30 years, and getting away with it, and then still smiling in our faces and telling us it’s our fault. That’s a lie, and this beautiful group is a testimony to that being a lie. When you get the makings of a U.S. autumn responding to the Arab Spring, and is growing and growing—-I hope it spills over to San Francisco and Chicago and Miami and Phoenix, Arizona, with our brown brothers and sisters, so it begins to coalesce.

In addition, Van Jones, the controversial former Obama “Green Jobs” czar-nominee, has also praised the revolutionary nature of the protests and their connection to Arab Spring. In an interview with HBO’s Bill Maher, Jones called for an “American Autumn” movement to serve as a progressive, populist, counter-Tea Party political movement that, incidentally, would usher in an “October Revolution” (Jones, ironically, referenced the Bolshevik takeover of Russia in October 1917).

In addition, the same forces propelling the protests in Egypt and across the Middle East are largely responsible for financing the “organized chaos” on Wall Street. In Egypt, the unofficial, de facto head of the opposition, presidential hopeful Mohammed ElBaradei (former Director General of the International Atomic Energy Agency), sits on the leadership of the International Crisis Group alongside George Soros, Zbigniew Brzezinski, and other international elitists. Soros had a direct hand in drafting a post-Mubarak Egyptian constitution, and is currently financing the Occupy Wall Street movement through outfits such as the Tides Foundation (which funds Adbusters, the leftist publication that instigated the protests), ACORN, the member bodies of the AFL-CIO, and other “progressive” groups. In addition, just as communist bodies such as the Tagammu Party (a Marxist body working with the Muslim Brotherhood in Egypt), Code Pink, the International ANSWER Coalition, and the Trotskyite Fourth International have hailed the protests across the Middle East, so too have these groups proudly orchestrated the Occupy Wall Street movement.

In addition, many leaders of the Egyptian protest movement have expressed their mutual affinity with the Occupy Wall Street protesters. Gigi Ibrahim, a leader of the Revolutionary Socialists of Egypt (a Trotskyite party affiliated with the International Socialist Tendency, known for its motto “Sometimes with Islamists, Never with the State,” and its overt collusion with the Muslim Brotherhood in anti-American and anti-Israeli activities), in an interview with the Global Post, offered practical encouragement to the Occupy Wall Street protesters:

The best thing I can say is they need to find a way to keep the momentum going. And assemble a group of people that have the same ideas to connect everyone and keep the momentum going. They should know not to give up despite their relatively small numbers. It’s not actually about numbers at this point. I actually see this movement growing. And if these American activists continue their protests and keep doing basically what they’re doing, they could actually succeed. They should also start thinking about how to expand their movement. I think it’s going already in the right direction, with the labor unions agreeing to join. But they need more labor unions to get involved.

Just as the protests across the Middle East take the form of toppling stabilizing autocratic forces in favor of implementing socialistic economic policies, Islamism, and geopolitical destabilization, the Occupy Wall Street movement is hailed by other overt Islamists for its potential to destabilize American society. None other than Iran’s top leader, the Ayatollah Ali Khomenei, has hailed the protests as a movement to topple “decadent” American capitalism. During a rally Wednesday in the western Iranian city of Kermanshah, the Ayatollah claimed that the United States is in a “full-blown crisis” because “its corrupt foundation has been exposed to the American people.” Iranian General Masoud Jazayeri of Iran’s Revolutionary Guard said that the protests against corporate greed and the gap between rich and poor are a revolution in the making that will topple what he called the “Western capitalist system,” and he apocalyptically views the movement as one which will topple American influence. “A revolution and a comprehensive movement against corruption in the U.S. is in the making. The last phase will be the collapse of the Western capitalist system,” said Jazayeri.

Likewise, the American Muslim community has hailed the protests. The Muslim Public Affairs Council (MPAC) issued a statement in support of the protests last week, claiming that the Occupy Wall Street movement “gives a voice to the frustrated” and is “maintaining a strong presence and continuing its visceral response to issues that pose an imposition on the average American citizen. While tactics or strategies on how best to effectively communicate grievances are being disputed by media pundits, the Muslim Public Affairs Council fully supports Americans’ civic engagement.”

MPAC, notably, has been linked to numerous terror groups. According to Discover the Networks, MPAC asserts that Hezbollah “could be called a liberation movement” and likens Hezbollah members to American “freedom fighters hundreds of years ago whom the British regarded as terrorists.” In a 1999 position paper, MPAC justified Hezbollah’s bombing of the American Marine barracks in Lebanon in 1983 as a “military operation” rather than a terrorist attack, and in a November 1997 speech at the University of Pennsylvania, MPAC head Salam Al-Marayati steadfastly justified his group’s refusal to call Hezbollah a terrorist organization. He also hailed the Hamas terrorist group as a political entity and a provider of social programs and “educational operations.”

In a related tone, the Occupy Boston protests, an offshoot of the Wall Street movement, colluded with supporters of a jihadist. The Boston Herald reports that Occupy Boston protesters welcomed supporters of accused terrorist Terak Mehanna, claiming he is a “victim of anti-Muslim bias.” Mehanna provided “material support to a designated foreign terrorist organization,” and acted as a “media wing” for al Qaeda. Mehanna also traveled to Pakistan, Yemen, Syria, and Iraq, seeking training from terror groups to fight American soldiers. Occupy Boston hosted the rally in support of Mehanna, yet claims not to take a position on his conviction.

The connections between the Occupy Wall Street movement and broader Islamist goals are therefore well-documented and offer further insight into the nature of the protests themselves.

In Case You Missed It:  Trump Supporters Raise over $100K to Save AOC's Abuela's Ancestral Home
Posted in Financial and tagged Islam, Muslims, Protests, Wall Street.

Apparently unemployment is not much of a problem in the private sector. At least Senator Harry Reid (D–NV) thinks so....