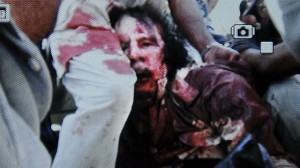 Libya’s Information Minister Mahmoud Shammam told the Associated Press that Gadhafi was in a convoy when he was attacked by rebels.

Posted in Terrorism and tagged Libya.

John Dewey and the Progressive Redefinition of Freedom

Today is John Dewey’s birthday, and though it’s been almost 50 years since this major Progressive figure passed away, thoughtful...