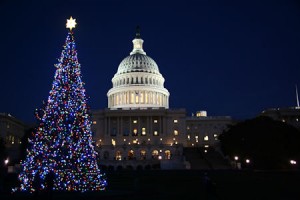 The U.S. capital has swapped top spots with Silicon Valley, according to recent Census Bureau figures, with the typical household in the Washington metro area earning $84,523 last year. The national median income for 2010 was $50,046.

The figures demonstrate how the nation’s political and financial classes are prospering as the economy struggles with unemployment above 9 percent and thousands of Americans protest in the streets against income disparity, said Kevin Zeese, director of Prosperity Agenda, a Baltimore-based advocacy group trying to narrow the divide between rich and poor.

“There’s a gap that’s isolating Washington from the reality of the rest of the country,” Zeese said. “They just get more and more out of touch.”

In Case You Missed It:  Joe Biden Refers to Supreme Court As “Extremist Court” in Meeting with Governors on ‘Abortion Rights’ (VIDEO)
Posted in Financial and tagged Congress, Economy, Recession, U.S. Capitol, US Citizen, White House.

That indigenous forces backed by Western military power could overthrow an odious unpopular regime backed by a second-rate military ought...