The US and the International Community the US should take military action to “take control” of Syria’s chemical weapons, as there is growing and compelling evidence that the Assad Regime is using the deadly nerve gas Sarin, and perhaps others on his own people. It is  crystal  clear that if the United States wants to and the international community wants to, it could act – inter alia, militarily. And then all the growing fears of these Weapons of Mass Destruction being used indiscriminately by Assad on his own Syrian people, and also falling into the hands of Al Queda, Hezbollah, and the Taliban will not be relevant or realized. What should that something be? It’s been said, said again, and said a hundred times: Arm moderates among the Syrian rebels. Take out Syrian air power. Take out scud launchers. Create a humanitarian corridor. These are DOABLE goals, requiring no boots on the ground. And while sorting the moderates from the Qatar-funded terrorists fighting Assad is getting harder and harder, surely such a job is not beyond the grasp of the United States of America.

It is in the greater interests of super power America and Nato to remove the Syrian dictator Bashar Assad from office as soon as possible. Assad is guilty of the most heinous crimes against his own people, murdering and slaughtering tens of thousands of his own Syrian people to earn the brutul nickname of the ” Butcher of Damascus “, just like his cruel father Hafeez Assad who ruled Syria with a  rod of iron, and who is infamous for paving the road to Damascus with the corpses of thousands of Syrian freedom fighters, who dared to oppose the autocratic Baath rule of the Assads. 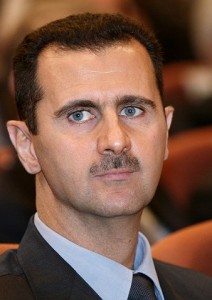 The Assad Regime is the one of the few remaining obstacles to real time peace in the Middle East, the other being Iran under President Mohammed Ahmadinejad, and Assad has long been fomenting terrorism against America and Israel in the Middle East, and his secret police have sponsored terrorist hits around the globe, been complicit in the assassination of Lebanese rulers, and he has been actively engaged in developing a covert nuclear facility for the production of nuclear weapons in the Bekka Valley.

Bashar Assad is aware the sands of time are running out for him rapidly, and will be shocked at the startling demise of Libyan dictator Muammar Gaddafi, and Assad is very capable of launching preemptive strikes against American and Israeli military interests in the region, and has already started to mine the Lebanese border, to deter American and Nato encroachment on Syrian soil. America and Nato should be prepared to instigate a No Fly Zone over Syria immediately, and step up the supply of military hardware and intelligence to the Syrian Resistance, to bring about the toppling of the Assad Baath Regime in the interests of liberating the Syrian people from despotic rule, and paving the way for a future Middle East Peace Initiative between Israel and its neighbors.

A Leaner, but Not Meaner, Military

The echo chamber of Washington is hard at work. The consensus is growing that the U.S. military will need to...