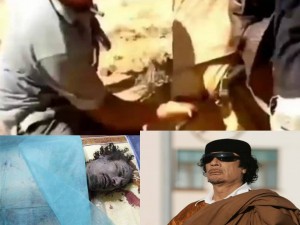 When the leaders of the revolution announced Gaddafi’s death at a press conference, even secular Muslim journalists started chanting “Allahu Akbar!”

A few days later, the leader of Libya’s National Transitional Council, Mustafa Abdul Jalil, declared at a rally in Benghazi that his country would now become an Islamic state.

At this stage, it is still not clear what version of Islamic law the new rulers of Libya are planning to enforce.

Will Libya take example from Iran, Sudan and Saudi Arabia where adulterers are stoned to death and convicted thieves have their hands cut off and beheaded in public squares?

Or will Libya endorse a more “moderate” version of Islam, as is the case in many Arab and Islamic countries?

Either way, what is clear by now is that the post-Gaddafi Libya will be anything but a secular and democratic country, but one where there is no room for liberals and moderates.

Those who thought the Arab Spring would bring moderation and secularism to the Arab world are in for a big disappointment.

The results of the first free elections held under the umbrella of the Arab Spring have now brought the Islamists to power in Tunisia.

But the Islamists who won the election in Tunisia are already being accused by their rivals of being too “moderate” because they do not endorse jihad and terrorism against the “infidels.”

What happened to all those young and charismatic Facebook representatives who told everyone that the uprisings would bring the Western values and democracy to the Arab countries? Some of the secular parties that ran in the Tunisian elections did not even win one seat in parliament.

What many Western observers have failed to notice is that most of the antigovernment demonstrations that have been sweeping the Arab world over the past ten months were often launched from mosques following Friday prayers.

This is especially true regarding Egypt, Yemen, Syria and Jordan.

Thanks to the Arab Spring, the Islamists in these countries are beginning to emerge from their hiding places to become legitimate players in the political scene.

The writing on the wall is very big and clear. In a free and democratic election, those who carry the banner of “Islam is the Solution” will score major victories in most, if not all, the Arab countries.

The Palestinians were the first to experience this new trend back in 2006, when Hamas defeated the secular Fatah faction in a free and fair parliamentary election held at the request of the US and the EU.

The leaders of the Arab Spring have failed to offer themselves to their people as a better alternative to the Islamists. As far as many Arabs are concerned, this is a faceless Facebook revolution that has failed to produce new leaders. The Arab Spring is becoming the Islamist winter.

In Case You Missed It:  9-11-2001 NEVER FORGET
Posted in Terrorism and tagged Islam, Libya, NATO, Terrorism.

What Is America? Hamilton and Reagan Got It

What is America? What is this country fundamentally about? By and large, pundits and politicians on the right and the...