ATHENS — The Greek government was plunged into chaos on Tuesday and faced an imminent collapse, as lawmakers rebelled against Prime Minister George Papandreou’s surprise call for a popular referendum on a new debt deal with Greece’s foreign lenders.

Such a collapse would not only render the referendum plan moot, it would likely scuttle — or at least delay — the debt deal that was agreed on in Brussels last week, putting Greece on a fast track to default and possible exit from the monetary union of countries sharing the euro currency. 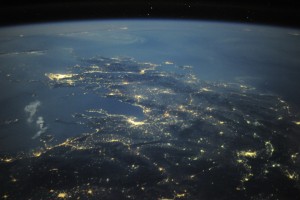 Analysts said that Mr. Papandreou’s call for a referendum was a last resort, meant to gain broader political support for the unpopular austerity measures in the deal without forcing early elections that would only worsen the country’s political and economic turmoil.

But after weeks of mounting pressure, one Socialist lawmaker quit the party to become an independent, reducing Mr. Papandreou’s majority to 152 seats out of 300 in Parliament, and another six Socialists wrote a letter calling on Mr. Papandreou to resign and schedule early elections for a new government with greater political legitimacy. Together, the developments made it doubtful whether his government would survive a confidence vote planned for Friday.

Meanwhile, the center-right opposition New Democracy party on Tuesday stepped up its calls for early elections. Its leader, Antonis Samaras, has opposed most of the austerity measures the government accepted in exchange for foreign financial aid. Mr. Samaras has said that if he were in power, he would try to renegotiate the terms of Greece’s arrangement with its principal foreign lenders, known as the troika: the European Union, the European Central Bank and the International Monetary Fund.

“Mr. Papandreou, in his effort to save himself, has presented a divisive and extortionate dilemma,” Mr. Samaras said on Tuesday. “New Democracy is determined to avert, at all costs, such reckless adventurism.”

Mr. Samaras declined to say whether he would ask his 85 members of Parliament to resign, a move that would lead to the dissolution of Parliament and a snap election. The next general election was not due until 2013, when the Socialists’ four-year-term expires. Mr. Samaras is expected to clarify his stance at a meeting of his party’s parliamentary group on Wednesday.

European leaders have repeatedly dismissed Mr. Samaras’s notion of renegotiating Greece’s deal with its lenders, saying that trying to do so would be damaging and would throw away months of work on a plan to keep Greece from defaulting.

Mr. Papandreou’s announcement of a referendum took Greek lawmakers by surprise, just a s it did political leaders and investors across Europe. On Tuesday, the state television channel Net reported that even the finance minister, Evangelos Venizelos, had not been informed in advance about the referendum, although he was aware of plans for a confidence vote.

Mr. Venizelos was taken to a hospital Tuesday morning, complaining of stomach pain. Doctors said he had an inflamed appendix. He is the latest in a string of governing party officials to be rushed to hospitals in recent weeks. One Greek negotiator had a heart attack in Brussels last week.

On Tuesday, European leaders said the deal reached last week to write down 50 percent of some Greek debt was the best available way to build a financial “firewall” that would keep Greece’s troubles from causing a damaging run on other shaky European economies like that of Italy.

“We are convinced that this agreement is the best for Greece,” they added. “We fully trust that Greece will honor the commitments undertaken in relation to the euro area and the international community.”

In Greece, Mr. Papandreou’s referendum proposal seemed to be his last, best hope. His political capital has dried up, and he faces intense anger from voters who have been squeezed to the breaking point by the austerity measures demanded by Greece’s foreign lenders.

“Papandreou could not take more political punishment,” said George Kirsos, a political analyst and the owner of the Athens City Paper. “We have a strange situation: Everyone’s cursing the government, and everyone expects the government to do the job by itself — to reorganize the economy, to cut the deficit, to make a deal with the Germans — but at the same time, nobody helps him.”

“All parties and all media criticize the government,” Mr. Kirstos added. “So Papandreou, in a sense, tried his best to do the referendum to force the parties, the media and the citizens to undertake their own responsibility. The referendum is a yes or no issue: Either you are in favor, or you decide that you say goodbye to the euro zone.”

Charged by Europe with dismantling the welfare state they helped create, many of Mr. Papandreou’s Socialist members of Parliament feel they too have reached their breaking points.

Vasso Papandreou, a prominent member of parliament and a former minister who is not related to the prime minister, called on Greek President Karolos Papoulias to order the formation of a unity government ahead of early general elections. “Bankruptcy is imminent,” she said. Earlier this month, Ms. Papandreou said she would vote for a new raft of austerity measures, but that it would be “the last time” she supported the government unconditionally.

“The current government has none of these necessary prerequisites. Today’s government policy is asphyxiating. Day by day the country is experiencing collapse, lawlessness and absence of government,” they added.

If Mr. Papandreou’s government falls, it would not be the first one in Europe to be toppled by the austerity demanded by European debt relief. In Ireland and Portuga,l governments that accepted bailouts from the European Union and the International Monetary Fund fell, and last month the Slovakian government fell over whether to participate in the European Union’s rescue package.

In Case You Missed It:  Get Ready for the Economic Collapse
Posted in Financial and tagged Debt, Debt Crisis, Euro, Europe, Greece.

Canada’s Muslims, Not of One Mind

by Daniel Pipes Macdonald-Laurier Institute November 2011 Comment on What Do Muslim Canadians Want? The Clash of Interpretations and Opinion...