The offices of French satirical weekly Charlie Hebdo has been firebombed by a Molotov cocktail by Muslims, a day after it named the Prophet Mohammed as its “editor-in-chief” for this week’s issue.

The fiercely anti-clergy magazine said the move, which included renaming the publication “Sharia Hebdo”, was intended to “celebrate” the victory of Islamist party Ennhada in Tunisia’s election. 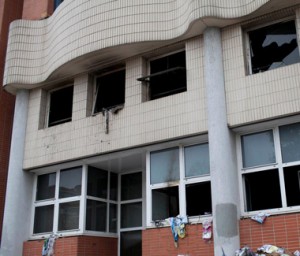 Only hours after declaring that "Islam is compatible with humor", the staff of a French magazine finds out that it really isn't.

Charlie Hedbo’s editor-in-chief, known as Charb, told France Info radio: “We no longer have a newspaper. All our equipment has been destroyed or has melted.”

No injuries have been reported

A single Molotov cocktail was thrown at the offices of Charlie Hebdo in Paris’s 20th arrondissement at around 1am. The ensuing fire was rapidly put out, but a large amount of material in the office was destroyed, police said.

“We cannot, today, put together a paper,” said Charb. “But we will do everything possible to do one next week. Whatever happens, we’ll do it. There is no question of giving in,” he said, adding that the magazine is filing a legal complaint against persons unknown.

According to Europe 1 radio, police are searching for two suspects seen near the scene.

Charlie Hebdo’s website has also been hacked with a message in English and Turkish cursing the magazine.

The message said: “You keep abusing Islam’s almighty Prophet with disgusting and disgraceful cartoons using excuses of freedom of speech.

Editor Charb said the attackers could not even have read the offending magazine.

The cover of this week’s issue, out on Wednesday, shows Mohammed saying: “100 lashes if you don’t die of laughter”.

In Case You Missed It:  Plan to tax drivers per MILE hidden in Biden's $1.2trillion deal passed
Posted in Terrorism and tagged Europe, France, Muslims, Terrorism.

Yet Another Attack on Marriage

Tomorrow, the Senate Judiciary Committee will begin debate on legislation that would repeal the federal Defense of Marriage Act (DOMA)....