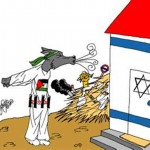 “It’s time to put the blame where it belongs!” explains Jeremy Gimpel, relating to the new video clip produced by TheLandofIsrael.com.

“UNESCO has accepted the Palestinian Authority (PA) as an official member,” Gimpel says, “pressure on Israel is mounting, fingers are pointing at the Jewish State, and the layers of the blame are those who should be our greatest allies. We want to remind the viewers of some of the facts and allow them to decide for themself who’s to blame in the Middle East conflict.”

“Israelis and the Palestinians have been embroiled in negotiations for years” says Ari Abramowitz, “Some of Israel’s most hard line leaders have made unprecedented sacrifices for peace, while throughout the entire process, the Arab leadership in Gaza, Judea & Samaria and Jerusalem have never compromised on any issue.”

“With regards to Israel, the differences between Hamas, Fatah (PLO), Islamic Jihad and Hizbullah have become nuanced at best”, Ari and Jeremy note, and ask: “Can any rational person blame Israel for the lack of peace when their so called “partner” in negotiations has never made even one concession or compromise?”

New viral video by Ari & Jeremy relates to the big question regarding the Middle East conflict – who is to blame for the lack of peace?

Eurocrats are Terrified of Democracy

Greece’s prime minister George Papandreou is in the doghouse only because he dared to offer voters a choice. Shall I...