NASHVILLE, Tenn. (BP) — A major seven-year study published in a mainstream journal is challenging the secular notion that gays and lesbians cannot change their sexual orientation.

The longitudinal study followed 61 subjects for between six and seven years and found that 23 percent of them reported successful conversion to heterosexual orientation and function and another 30 percent reported stable behavioral chastity with a significant dis-identification with gay orientation. Twenty percent of the subjects had given up and embraced a gay identity.

It is believed to be the first study of its kind — that is, one that followed people over a series of years and monitored success or failure. The study followed subjects who voluntarily were taking part in Christian ministries affiliated with Exodus International, the nation’s largest ministry devoted exclusively to reaching out to homosexuals.

Partial results of the study were released in 2007 and 2009 but now are being published in a peer-reviewed journal, which its authors hope gives it more credibility to those who had criticized it. The study is published in the Journal of Sex and Marital Therapy, Volume 37.

“The results that we report in our study suggest that change is definitely not impossible, and it’s probably not uncommon, either,” coauthor Stanton L. Jones, a psychologist at Wheaton College, told Baptist Press. “That doesn’t mean that change is easy. We think that these results need to be taken into account as a way of respecting the religious freedom of individuals.”

Baptist Press reported on the earlier findings in ’07 and ’09. Having the study published in a peer-reviewed journal, Jones said, is significant.

“It signifies that the methodology meets the basic requirements for being taken seriously as a piece of scientific literature,” Jones said. “Critics still dismiss the study. They say, ‘Well, it’s only one study,’ or they say it’s not a large enough sample. But I think the study stands as a significant challenge to the reigning views on this matter, especially given that the major mental health organizations say in alternate voices that change of sexual orientation is impossible or that change in sexual orientation is highly unlikely.”

A statement on the American Psychological Association’s website says that promotion of change therapy “contributes to a negative climate for lesbian, gay, and bisexual persons.”

“All major national mental health organizations have officially expressed concerns about therapies promoted to modify sexual orientation,” the APA statement says. “To date, there has been no scientifically adequate research to show that therapy aimed at changing sexual orientation … is safe or effective.”

Changing attitudes on the subject isn’t easy, Jones said. Stories about gay people who tried but didn’t change tend to get more media attention, he said. Also, he noted, the issue has become political. When Attorney General Eric Holder announced in February that the Justice Department would no longer defend the Defense of Marriage Act, part of Holder’s reasoning was that there’s “a growing scientific consensus … that sexual orientation is a characteristic that is immutable.” The study by Jones and coauthor Mark A. Yarhouse of Regent University directly challenges that argument.

“To admit that the study has any validity is to draw into question … the change in policies,” Jones said.

The study does not examine why some people are more successful in changing their orientation than others.

“We can’t answer that,” Jones said. 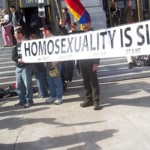 Some critics say the study was deficient because it did not record the physical responses of subjects to sexual stimulus. In some mainstream circles, that is done by placing pornography in front of the subjects and either monitoring the physical response or monitoring the brain for a response. But such a test, Jones said, would have gone against what Exodus strives to obtain — sexual purity in both thought and practice.

Jones and Yarhouse caution against projecting success ratios based on their study. For instance, they say, it would be wrong to say that 23 percent of people can change their orientation, just because 23 percent of the people in their study did so. Nevertheless, they say, the study shows that change is possible.

“I know individuals who have been married for 20 and 30 years after coming out of the gay community,” Jones said. “The claim that nobody has ever changed is not substantiated either by our study or by any number of powerful anecdotes that are out there.”

In Case You Missed It:  Under covid tyranny, US hospitals have become MURDER FACTORIES where ivermectin is forbidden because it saves lives
Posted in Freedoms and tagged Liberalism, Political Correctness, United Socialist States of America.

The office of French satirical magazine Charlie Hebdo was badly damaged by a firebomb on Wednesday, after it published a...