U.S. unemployment rates may officially be hovering around 9 percent but in reality, they’re up near the 20 percent levels around the time of the Great Depression, maybe even higher, economist and author Mark Skousen told Newsmax in an exclusive interview.

Unemployment rates measure the number of people in the workforce looking for jobs. 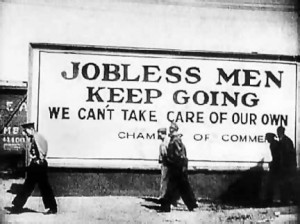 But those holding down part-time jobs here and odd jobs there, or those who have grown discouraged from looking and have quit sending out resumes aren’t typically part of the workforce that define headline unemployment rates.

Bottom line: It’s a lot worse out there than what the government is pitching, and methodology aside, generous unemployment benefits are preventing would-be workers from getting out there and finding jobs, which drains the economy of fiscal resources it can’t afford to lose.

“The reason we are not seeing a Great Depression type of phenomenon is because of our generous welfare system — our unemployment compensation, which by the way, extending our unemployment compensation insurance is one of the worst things that can happen because that will just keep workers postponing the time when they need to seriously go out and look for work,” Skousen adds.

High unemployment rates could sweep President Barack Obama out of the White House and do away with any Democratic dominance elsewhere in the government.

“The 9 percent figure is not particularly helpful. It is helpful for the Republicans. I think they are going to sweep all three branches of government in the next election. It’s going to be against Obama rather than for Mitt Romney or whoever the Republican candidate is,” says Skousen, who edits the investment newsletter Forecasts & Strategies.

While unemployment rates remain high, the fallout from Obama’s failure stimulus measures, including a weaker dollar and rising inflationary pressures, are becoming more and more evident — and making voters wearier.

“The only silver lining, if you will, of this dark cloud we are facing is that we could see a major scene change where real fiscal responsibility comes back into place,” says Skousen, author and editor of the upcoming “Maxims of Wall Street: A Compendium of Financial Adages, Ancient Proverbs, and Worldly Wisdom.”

Federal Reserve Chairman Ben Bernanke deserves some of the blame as well, as loose monetary policies are threatening to push up inflation rates alongside hefty government spending programs, both blessed by the White House.

The Federal Reserve has already rolled out two rounds of quantitative easing — asset purchases by the Fed from banks with the aim of flooding the economy with liquidity in hopes of lowering unemployment rates — and officials have hinted a third round is possible. Officially, the Federal Reserve remains in standby mode, which is wise, Skousen says, because the economy is showing signs of growing on its own.

“I think Bernanke, if he has any kind of responsibility in his soul, then he’ll wait and take a wait-and-see attitude,” said Skousen, also the founder and producer of FreedomFest, an annual non-partisan festival of libertarians.

Election-year politics, however, could rear their complicated heads.

“The problem is the Fed appears to have lost its independence. It seems to be tied to the political powers that be, and this is what concerns me right now is that Ben Bernanke is doing the dirty work for Obama to get him reelected by stimulating the economy,” Skousen says.

Furthermore, the Greek debt crisis should serve as a global warning that out-of-hand spending must be controlled, Skousen adds. Germany and France have been scrambling to keep indebted southern European countries from defaulting and abandoning the euro, and measures include expanding the European Financial Stability Facility, as any default could send shockwaves through financial systems worldwide.

“The E.U. is basically doing everything they can to keep the euro together — to keep the European Union together. They are desperate, and that’s why they have a fund and are attempting to raise 1 trillion euros in order to keep it all together,” Skousen says.

So far, Greece, the source of the crisis, remains in the eurozone, but also, it’s not the only country guilty of spending beyond its means.

Washington should look at the troubled Adriatic country as a weather vane for what’s in store if serious fiscal adjustments aren’t made.

Is China More Prosperous Than the U.S.?

The Legatum Institute has just released its 2011 Prosperity Index. The index has a number of strengths, topped by the...