President Obama proposed a tax on your live Christmas Tree for this holiday season and at least one wag on Twitter said that it was a typical  jizya tax from a Muslim a. Yes, the most Muslim-friendly president evah wants to tax Christians on their holiday fir. Nice.

Obama intended to initiate this tax of fifteen cents per live tree so that he could take that money and fund an advertising project for, uh,selling live Christmas trees. Yes, it’s that idiotic.

To pay for the new Federal Christmas tree image improvement and marketing program, the Department of Agriculture imposed a 15-cent fee on all sales of fresh Christmas trees by sellers of more than 500 trees per year (7 CFR 1214.52). And, of course, the Christmas tree sellers are free to pass along the 15-cent Federal fee to consumers who buy their Christmas trees.

Am I saying Obama is really a Muslim? Who knows?  But with this idiotic federal tax to be levied on Christmas trees, well, what did the Obama administration think people were going to taunt him with? Think he he tried to tax Muslims on the sale of birkas? 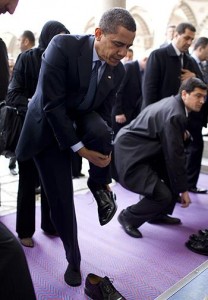 Obama Praying to 'Allah' with other Muslims

Even more idiotically this theft of our tax money (By that I mean Acting Administrator Shipman) claimed that this was “not a tax nor does it yield revenue for the Federal government.”

As David Addington notes, “The Federal government mandates that the Christmas tree sellers pay the 15-cents per tree, whether they want to or not. The Federal government directs that the revenue generated by the 15-cent fee goes to the Board appointed by the Secretary of Agriculture to carry out the Christmas tree program established by the Secretary of Agriculture. Mr. President, that’s a new 15-cent tax to pay for a Federal program to improve the image and marketing of Christmas trees.”

Now, some extremist lefties out there have hastened to point out that this proposal was first floated during George W. Bush’s last term. And to that we can only say: who cares? Bush did not try to implement this idiotic thing. Obama did. It’s Obama’s Christian tax, not Bush’s,. time to get over Bush you leftist fools.

Fortunately for all of us, Obama did a back flip on this one and put a halt to the new tax and program in order to revisit the program to see if it is a good idea.

This is why radio talk show host Michael Medved is no kind of conservative. He just argued on his radio show that this tax on Christmas trees is no big deal because it’s “only fifteen cents per tree.” MORON!

A principled conservative would be against this idiotic tax if it were one penny per hundred trees!!

As they say, there is nothing so permanent as a government program and this one would be just another government boondoggle that would grow and grow until it cost us billions a day like so many other useless government agencies.

That Michael Medved doesn’t see this and isn’t concerned about birthing another wasteful government agency and giving this agency new controls over our lives, well it pretty much shows that he — admittedly once a liberal — never really did become a conservative. With friends like Medved, who needs enemies.

In Case You Missed It:  Swalwell Plays Ridiculous Recording of Man with Fake Southern Accent ‘Threatening to Kill His Three Children’ – And No One is Buying It (AUDIO)
Posted in Tyranny and tagged Islam, Muslims, Obama, Taxation.

14 Reasons Why We Should Nationalize The Federal Reserve

One of the most important steps that we could take to bring prosperity back to America would be to nationalize...