Photographs recently obtained reveal that Barack Obama appeared and marched with members of the racist organization the New Black Panther Party as he campaigned for president in Selma, Alabama in March 2007.

The photographs, captured from a Flickr photo-sharing account before it was scrubbed by the posters, are the latest evidence of the mainstream media’s failure to examine Obama’s extremist ties and radical roots.

In addition, the new images raise questions about the possible motives of the Obama administration in its infamous decision to drop the prosecution of the Panthers for voter intimidation.

The images, presented below, also renew doubts about the transparency of the White House’s guest logs–in particular, whether Panther National Chief Malik Zulu Shabazz is the same “Malik Shabazz” listed among the Obama administration’s early visitors.

The book exposes Obama administration corruption far beyond the Panther dismissal, and reveals how the institutional Left has turned the power of the DOJ into an ideological weapon set to implore Obamas’ racist ideology.

Adams’s book also describes, in detail, the Selma march at which then-Senator Obama was joined by a group of Racist Panthers who had come to support his candidacy.

Among those appearing with Obama was Shabazz, the Panther leader who was one of the defendants in the voter intimidation case that Attorney General Eric Holder dismissed. Also present was the Panthers’ “Minister of War,” Najee Muhammed, who had called for murdering Dekalb County, Georgia, police officers with AK-47’s and then mocking their widows in this video (7:20 – 8:29).

Injustice includes a disturbing photo of Shabazz and the Panthers marching behind Obama with raised fists in the “Black Power”hate  salute.

There are even more photographs.

I have learned that Regnery initially received approval from a person who took pictures of the events in Selma to publish these additional photographs in Injustice.

The photographs show Obama sharing the same podium at the event with the Panthers.

In the first image, Shabazz stands at the podium, surrounded by uniformed Panthers, including Muhammed. In the second photograph, Obama commands the same podium.

Here are the images: 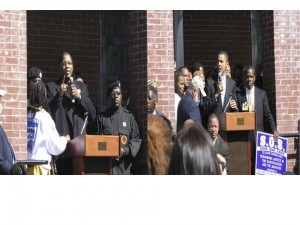 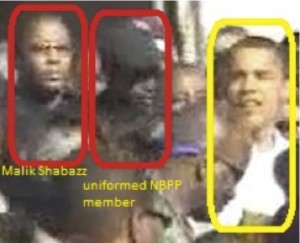 In Case You Missed It:  Joe Biden Admits Life Under His Presidency Sucks: “There’s a Lot of Anxiety, Gas Prices Are Up Exceedingly High” (VIDEO)
Posted in Tyranny and tagged Obama, Racism.

The Islamist Jihad On Europe

By Peter Paton Europe today is tottering under a barbaric and savage Medieval Jihad War which is being waged by...