OSLO: Shocking: “One in ten Norwegian women over the age of 15 has been raped due to “multiculturalism”,” The New York Times has reported. 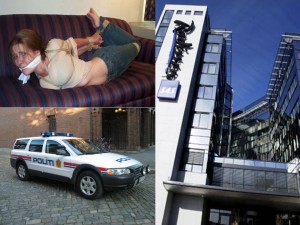 Rapes are become so prevalent in once peaceful Oslo’s that Hotels are resorting to issuing Hotel guests key-chain alarms in the event they are attacked in the capital’s many darkened areas after hours.

A doubling of sexual assaults in Oslo this year has led edgy hotel guests to request pepper spray from the night porter at the Radisson Blu Scandinavia when they go out after hours. The hotel’s response has instead been to issue high-pitched alarms to staff, and to guests who ask about protection, newspaper Bergens Tidende reports.

Due to the rising immigration in Oslo rapes are equally on the rise. In-line with the city’s rape awareness measures, staff at the Blu receive self-defence instruction and are issued with the distress alarms. The morning programmes of Oslo-based TV stations have featured martial arts instructors’ lessons for escaping situations that could lead to sexual assault.

According to the Oslo police report there was a total of 186 of known rape cases in 2010, double that for 2011. In all 83 assault-rape cases, they were carried out by sheer physical force. In these 83 cases the perpetrator could be identified by the victim. In all 83, the attacker was described as having “non-western appearance,” a laundered “politically correct” liberal euphemism for Muslim immigrants from Africa, the Middle East, or Asia.

The recent arrest of five Afghan and Pakistani Muslim men immediately stoked calls for the creation of a national police sex-crimes unit. Oslo mayor Fabian Stang also called for discussions on a possible curtailment on freedoms for asylum seekers from Islamic backgrounds.

Whatever the count of foreigners involved, Mayor Stang weighed in with a call for “dramatic action” after a record year of 48 “after hours” rapes. While he singled out non-western foreigners, he also made it clear that asylum seekers should not be kept confined from the rest of society.

In Case You Missed It:  Your dominant DELUSION determines how you experience "reality" and how it all ends for you
Posted in Freedoms and tagged Crime, Europe, Immigration, Muslims, Norway.

Terrorism in Southeast Asia: Down, but Not Out

Armed Forces of the Philippines investigators inspect the site of a bomb blast in Cotabato City, southern Philippines August 2,...