The Whitehouse corruption continues, this appears to be another Solyndra in the making. President John F. Kennedy’s nephew, Robert Kennedy, Jr., netted a $1.4 billion bailout for his company from the Obama administration, BrightSource, through a loan guarantee issued by a former employee-turned Department of Energy official whom donated millions to Obamas’ 2008 campaign. 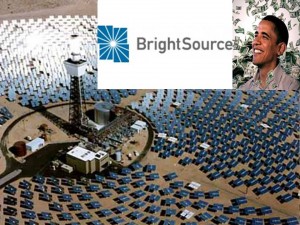 It’s just one more in a string of eye-opening revelations by investigative journalist and Breitbart editor Peter Schweizer in his explosive new book, Throw Them All Out.

The details of how BrightSource managed to land its ten-figure Billion dollar taxpayer bailout have yet to emerge fully. However, one clue might be found in the person of Sanjay Wagle. Wagle was one of the principals in Kennedy’s firm who raised money for Barack Obama’s 2008 presidential campaign. When Obama won the White House, Wagle was installed at the Department of Energy (DOE), advising on energy grants.

From an objective vantage point, investing taxpayer monies in BrightSource was a risky proposition at the time. In 2010, BrightSource, whose largest shareholder is Kennedy’s VantagePoint Partners, was up to its eyes in $1.8 billion of debt obligations and had lost $71.6 million on its paltry $13.5 million of revenue.

Even before BrightSource rattled its tin cup in front of Obama’s DOE, the company made it known publicly that its survival hinged on successfully completing the Ivanpah Solar Electrical System, which would become the largest solar plant in the world, on federal lands in California.

In its Securities and Exchange Commission filings, BrightSource further underscored the risky nature of the Ivanpah venture and, more broadly, the company’s viability:
Our future success depends on our ability to construct Ivanpah, our first utility-scale solar thermal power project, in a cost-effective and timely manner… Our ability to complete Ivanpah and the planning, development and construction of all three phases are subject to significant risk and uncertainty.

Ironically, in 2008, Kennedy wrote a CNN article praising Obama as reminiscent of his famous father and uncle. The article, titled “Obama’s Energy Plan Would Create a Green Gold Rush,” proved prophetic. However, the “green gold rush” came in the form of $1.4 billion of taxpayers’ money flowing into the pet projects of rich venture capital investors like Kennedy, not average citizens.

What’s more, BrightSource touted the Ivanpah project as a green jobs creator. Yet as its own website reveals, the thermal solar plant will only create 1,400 jobs at its peak construction and 650 jobs annually thereafter. Even using the peak estimate of 1,400 jobs, that works out to a cost to taxpayers of $1 million per job created.

As Schweizer writes in Throw Them All Out, “A billion dollars in taxpayer money being sent to wealthy investors to bail them out of risky investments—does this sound familiar to anyone?”

In Case You Missed It:  “We Are Not Slaves, We Are Farmers!” – Polish and Italian Farmers RISE UP Against Government Elites Destroying Their Family Businesses
Posted in Tyranny and tagged Crime, Obama, US Citizen.

The Dangers of Legitimizing Muslim Grievances

(Daniel Greenfield) There is no surer path to Muslim violence than through the legitimization of Muslim grievance. And once you...