(New Yorker) More violent clashes in Tahrir Square, and the crowd is only growing larger and more determined after the revolution has turned to a undesirable twist for Egyptians.  The state security police have tried two or three times to take the square and have had to retreat, behind a cordon of tear gas, to the streets around the Interior Ministry, a couple of blocks away. 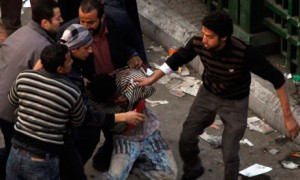 “Everyone is angry,” Shahira Mubarak, a young English tutor, told me.  She is one of many who occupied Tahrir last February and have now returned to defend it. “You can sense it. Everyone has lost patience. The more violent they are, the more people come.”

As night fell, there were as many people on the square as I saw at the height of the revolution—tens of thousands—and as the working day ended more were arriving. Most, but not all, were young men, many with red eyes in ghostly faces, caked with the white residue of a sugar, flour, and vinegar paste applied as protection against the tear gas.   Some had bandaged eyes; some construction hats. I saw one man wearing a welder’s helmet. A vendor was selling safety goggles—the kind a high-school chemistry class might use—and surgical masks. (My translator went to buy gas masks this morning. “Oh, you are the revolutionaries!’ a policeman in the shop said. My translator braced himself for a tirade, but instead the policeman embraced him: “God keep you safe! We are all with you!”

From time to time, the tear gas fell deep in the square, and sections of the crowd would run on the call, “Hold together! Hold together!” One man came up and tugged at my elbow. “Look, snipers!” he said, pointing to the roof of the prime minister’s office in the cabinet building a block away from the square. We could see a row of police in silhouette. Motorcycles ferried the limp bodies of front-line protestors who had fainted to several field hospitals set up in and around the square. Volunteers sprayed saline into their eyes. One of them, a medical student, told me that he had seen several rubber bullet wounds over the course of the afternoon, birdshot pellets embedded in necks and torsos, rib fractures from stone throwing. “They shoot the tear gas canisters directly at people,” he explained. “We had a case of a fractured skull.” More than twenty-five have been reported killed over the past three days; more than a thousand injured. The violence has spread to several other cities, including Alexandria, Suez, and Port Said.

The demonstration on Friday—asking for a clear and speedy timetable for the Supreme Council of the Armed Forces to hand over power to a civilian government—was Islamist, but the crowds now calling for an end to military rule are varied. I found Mohamed Fathi, a doctor with the shorn mustache and untrimmed beard of a fundamentalist, who had volunteered at a field hospital, eating popcorn, still wearing his rubber surgical gloves. He had come back to Tahrir because a friend of his had said, “We have to show the liberals that they are not alone, and that we support them against the Supreme Council,” he told me. “They didn’t learn from Mubarak, from the examples of Syria and Libya. Fighting us, killing people doesn’t work.”

One man came up to show me a tear-gas canister that was made in the U.S. “I was one of the people who thanked the Army in February,” he said. “But the Army took advantage of my love and respect and appreciation, by oppressing the strikers and the revolutionaries.” He clarified, “I have no problem with the Army. My problem is only with the Supreme Council.”

For the first time since Mubarak fell, the crowd seemed unified with a single purpose. The chants are unequivocal: “The people want to topple the Marshal!” They are referring to Field Marshal Tantawi, head of the Supreme Council and the de facto ruler of Egypt since Mubarak stepped down. “The people want to topple the Supreme Council!” I haven’t felt such clarion will on Tahrir since the revolution. It feels like another one may be beginning.

UPDATE: An announcement that the entire cabinet had resigned was met with much eye rolling among the protesters on Tahrir Square. The parallels to Muabrak’s last-ditch cabinet shuffling, in January, seemed almost farcical. On the square, I bumped into Hisham Akkam, one of the leaders of the new Justice Party, which has been trying to forge a technocratic, middle-class path between the polarized liberal and Islamist extremes of Egyptian politics. He was grinning, full of revolutionary adrenaline, amid the pall of tear gas which now hangs, acrid, over most of downtown Cairo. “I don’t think anyone can control the crowd now,” he said, as another thumping volley of tear-gas canisters being fired echoed from the front line around the block.

It was not clear if the Supreme Council had accepted the cabinet’s resignation; conflicting reports seemed to suggest they would not accept it until a new government could be agreed upon. (“The cabinet?” Akkam said scornfully. “Who is going to accept being in this position? It’s very clear now we want a definitive date for a presidential election.”) The square has moved beyond parties and politics for the moment and is in full revolution mode. During the evening, Mohamed Beltegy, a prominent Muslim Brotherhood leader who was on Tahrir every day during the revolution, appeared on the square and was hounded away, with some protesters derisively showing their shoes to him. “If any party tries to take advantage of the medan”—Arabic for “the square”—“it’s the wrong tactics, it’s the people again,’ Akkam said. Another Justice Party activist stood nearby cradling a heavy plastic police truncheon. “I took this from one of the police on the 28th of January,” he told me. “I kept it in my room. This is the second wave of the revolution.”

In Case You Missed It:  How one brave nurse exposed the gender mutilation of children taking place at Tavistock
Posted in Freedoms and tagged Egypt, Freedom, Riots.

China's state media Tuesday blasted the United States over its "ticking debt bomb" and urged American lawmakers to be more...