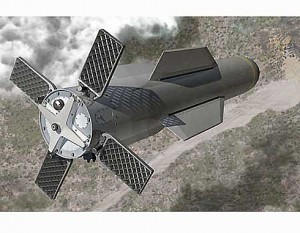 (Oh, and the massive bomb’s name is almost as charged as the term, Pre-Dawn Vertical Insertion, if you get what I’m sayin.)

The service apparently got its first production MOP in September and has been stockpiling them ever since. That’s a decent turnaround since April when the Air Force gave Boeing a $28 million contract to deliver eight MOPs and their associated loading equipment. The service gave Boeing a follow-on $32 million contract for eight more MOPs in August. No word on why that deal cost an extra $4 million when it appears otherwise identical to the April contract.

The Air Force has modified several B-2 stealth bombers to carry two of the GPS-guided bombs, apiece. This pretty much tells you all you need to know about the type of mission the MOP will be used for; a super bunker-buster carried by our most survivable heavy bomber. It’s meant to threaten nations like Iran and North Korea with the prospect of an air strike that can take out their most hardened targets.

I’ve got to say, this is pretty timely, given the recent flood of publicity surrounding Iran’s alleged progress toward building a nuclear weapon. While the MOP is big and costly, the West may have more subtle ways of putting kinetic pressure on states like Iran.

In Case You Missed It:  Same Biden regime that won't even bother to save Americans in Afghanistan claims everyone should take vaccines because the government cares about saving lives
Posted in Freedoms and tagged Military, Missile Defense, United Socialist States of America.

A Day of ‘Public Thanksgiving and Prayer’

Most of us have heard or read at least part of Abraham Lincoln’s Thanksgiving proclamation at some point. But even...