The recent executive director of the controversial Council on American-Islamic Relations’ South Florida chapter is a founder and spokesman of Occupy Miami. Mohammad Malik currently is as an activist with several other Islamic groups.

He has led hate-filled anti-Israel protests in which participants were filmed wearing Hamas paraphernalia while chanting “Nuke Israel” and “Go back to the oven” – a reference to Jews being gassed in the Holocaust.

Malik has been widely quoted in the Florida news media in recent weeks speaking for Occupy Miami. 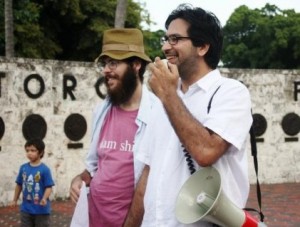 The Miami Herald identified Malik as one of the organizers of Occupy’s Miami’s downtown campsite headquarters.

“We’ve established that we can be here,” Malik told the Herald, speaking as one of the first Occupy Miami organizers. “People said we were stupid amateurs who don’t know what we’re doing. … But we did it. We’ve survived and we’re growing.”

The Independent quoted Malik, identified as protesting with the group since the beginning, as stating there were “a lot of cops” in the area, but protesters were “trying to figure out the situation so that it doesn’t escalate.”

The Independent previously quoted Malik as an “unemployed Miami native who has worked with the ACLU and is the current spokesperson for Occupy Miami.”

In September 2010, Malik was appointed as the director of CAIR’s South Florida chapter, covering the region of Broward, Palm Beach and Miami-Dade counties.

In March 2010, Malik organized a CAIR dinner in Miami. The keynote speaker was Siraj Wahhaj, who was named as an unindicted co-conspirator in the 1993 World Trade Center bombing. Wahhaj has also defended the convicted WTC bomb plotters and has urged the Islamic takeover of America.

He did not return email and phone requests for comment.

“He left several months ago, maybe almost a year ago,” said Hamze. “He got a better position, I think, at the ACLU,” he said.

Malik has served as coordinator of several other Islamic groups, such as the South Florida Palestine Solidarity Network, through which he has organized hate-filled protests; the American Muslims for Emergency Relief; and Students for Justice in Palestine.

Malik himself was the principal organizer of numerous anti-Israel rallies.

A rally in March was titled “Miami’s Third Intifada Rally for Palestine.”

During the demonstration, protesters reportedly chanted a slogan often used by Hamas and other Palestinian radicals calling for the destruction of Israel: “From the river to the sea, Palestine will be free.”

A Malik-led rally in December 2008 reportedly drew 200 to 300 rowdy supporters, with some screaming for Jews to “go back to the ovens.”

The Florida Sun-Sentinel featured a picture with the caption “Malik incites the crowd.”

Another woman, wearing a headscarf, shouted: “Go steal other lands. Go! Murderers! Go back to the oven! You need a big oven.”

Wahhaj, brought in to keynote Malik’s CAIR dinner last year, repeatedly has urged the U.S. to accept Islamic law. Discover the Networks notes Wahhaj in 1991 predicted America will fall unless it “accepts the Islamic agenda.”

Also, in a 1992 address to an audience of Muslims in New Jersey, Wahhaj expressed his desire to replace the U.S. government with an Islamic caliphate.

“If we were united and strong,” Wahhaj said, “we’d elect our own emir (leader) and give allegiance to him. … [T]ake my word, if 6-8 million Muslims unite in America, the country will come to us.”

In 1995, Wahhaj was named by U.S. Attorney Mary Jo White as an unindicted co-conspirator to the 1993 bombing of the World Trade Center. He objected to that designation, noting in his defense that he had eaten “dinner with Secretary of State [Madeleine] Albright – after the list” of co-conspirators had been released.

Discover the Networks notes that in the summer of 1999, Wahhaj testified as a character witness for convicted terror mastermind Sheik Omar Abdel-Rahman. Wahhaj stated, on the record, that he considered it an honor to have had an opportunity to host Abdel-Rahman at his mosque, describing him as a “respected scholar … bold … [and] a strong preacher of Islam.”

Malik is not the first CAIR personality to be involved with Occupy.

Earlier this month, CAIR-New York led a prayer service at Occupy Wall Street in conjunction with the Islamic Leadership Council and the Arab-American Association of New York.

The groups are strong supporters of ending Israel’s blockade of the Hamas-ruled Gaza, while scores of other organizations tied to Occupy Wall Street, including Code Pink and several unions, took part in flotilla attempts to reach Gaza.

Scores of radical groups backing the anti-Wall Street movement also helped to spearhead activism in support of the Gaza Strip, including several attempts to send aid flotillas to the coastal territory’s Hamas rulers.

Another grantee of Tides is the Adbusters magazine, which is reported to have come up with the Occupy Wall Street idea after Arab Spring protests toppled governments in Egypt, Libya and Tunisia.

Since protests first broke out in Wisconsin in February, organizers, including those behind Occupy Wall Street, have not been shy about likening their cause to the Mideast and North African uprisings.

A tour of the downtown Manhattan square where protesters are holed up, Zuccotti Park, usually finds at least some protesters wearing “Free Gaza” t-shirts or distributing material in support of Gaza.

WND was among the first to report on the far-left U.S. involvement in the Free Gaza Movement, which was behind many of the flotilla attempts.

Fenton Communications reportedly developed a communications action plan for an 18-month campaign, known as the Al Fakhoora Project, aimed at delegitimizing Israel’s naval blockade while garnering support for the Hamas-led government and the people of the Gaza Strip.

Newsmax last year reported Fenton signed contracts worth more than $390,000 with Sheikha Mozah Bint Nasser Al-Missned, the wife of Qatar’s ruler, as well as a separate foundation she chairs.

The contacts were for “developing and managing” the campaign website, “including regularly advising and updating the site with new content,” according to the contract documents reviewed by Newsmax.

Al Fakhoora claims it is working to secure “freedom” for Gazan students to “pursue a quality education without the danger of conflict or the torment of occupation.”

The main goal of the Fenton-represented Al Fakhoora is to end Israel’s naval blockade of Gaza.

Israel maintains the blockade to ensure Hamas cannot rearm itself. The Islamic group has been caught at sea many times attempting to bring weapons into Gaza.

The release detailed how a group calling itself 99 New York was joining the Occupy Wall Street movement as a partner. The 99 organization is a coalition of unions and community organizations, such as United NY, Strong Economy for All Coalition, N.Y. Communities for Change and the Working Families Party.

It was the 99 New York group, which claims to represent the will of 99 percent of the U.S. population, that led to the Occupy Wall Street march on New York streets.

The press release was sent to reporters and was also posted in various Occupy Wall Street-affiliated websites, including StrongForAll.org.

Gordon’s Fenton email was provided on the release. Prior to joining Fenton, Gordon worked for years on Capitol Hill and in Democratic Party politics. He spent seven years as the top aide to Rep. Dennis Kucinich, D-Ohio.

Be sure to listen to a special Heritage Libertad podcast on the recent Spanish elections. Click here to listen. With...