The’ moderate’ Muslim Brotherhood held a massive rally in Cairo, Egypt’s most prominent mosque yesterday after Friday prayers. The Islamists chanted, “One day we will kill all Jews.” YNet News reported:

A Muslim Brotherhood rally in Cairo’s most prominent mosque Friday turned into a venomous anti-Israel protest, with attendants vowing to “one day kill all Jews.”

Some 5,000 Muslims joined the rally, called to promote the “battle against Jerusalem’s Judaization.” The event coincided with the anniversary of the United Nations’ partition plan in 1947, which called for the establishment of a Jewish state. 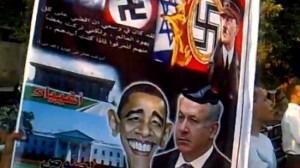 However, most worshippers who prayed at the mosque Friday quickly left it before the Muslim Brotherhood’s rally got underway. A group spokesman urged attendants to remain for the protest, asking them not to create a bad impression for the media by leaving.

Speakers at the event delivered impassioned, hateful speeches against Israel, slamming the “Zionist occupiers” and the “treacherous Jews.” Upon leaving the rally, worshippers were given small flags, with Egypt’s flag on one side and the Palestinian flag on the other, as well as maps of Jerusalem’s Old City detailing where “Zionists are aiming to change Jerusalem’s Muslim character.”

Propaganda material ahead of Egypt’s parliamentary elections was also handed out at the site.

Last week, Senate Majority Leader Harry Reid (D-NV) took to the Senate floor and made a bold assertion–that there isn’t...