For starters black Friday was chaos, a Wal-Mart shopper was pepper-sprayed by a “competitive shopper,” while another was Tasered by police. The behavior at Wal-Mart and elsewhere may betray a certain amount of desperation on the part of consumers.  In tough economic times, people will do almost anything to get good bargains. But the earlier opening hours, the extreme discounts, and the super-hyped sales signify a problem with the retailing industry ,  not with America’s consuming culture. 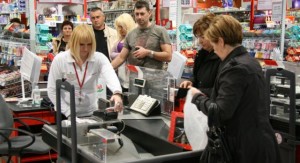 Now lets loot at the most recent retail sales data, the Obama administration is already boasting about black Fridays sales numbers.  The headlines looks good.  Retail sales in October were a record $397.7 billion, up from September, and up 7.2 percent from October 2010.,  everything appears hunky dory, but is it?

A deeper look into retails sales tells a secret the Obama administration does not want you to know, especially considering the election less than a year away.  Reality is the most rapidly growing components of retailing include segments that we don’t really think of as shopping.    For example the biggest retail sector right now is  cars and car parts, which account for about 18 percent of the total; they’re up 10.1 percent so far this year, mainly due to people no affording new homes and instead purchasing cars,  and spending oodles to maintain the old clunker on parts.

Also retails sales includes the food and beverage stores , ‘i.e. groceries’. They constitute about 13.2 percent of the retail sales, and they’re up 5.6 percent through the first ten months.  Why are they up, because the price of groceries have gotten more expensive.  Not really a positive thing one would have to admit, but these still count as retail sales, so the Whitehouse might as well try and spin it to take some credit, can you blame them?

Another big up in retail sales, yes you guessed it gasoline.   Stations alone account for 11.7 percent of total sales, and their sales are up 19 percent so far in 2011, why, well of course thanks to higher gas prices and the fact that people put less gas in each visit, actually half less on average.  This increases the number of visits, that equates to an increase in the sales of candy bars and coffee, the sales go up accordingly. Food service and drinking places account for 10.7 percent of total sales.

Now we look at traditional sales,  clothing and clothing accessories, furniture and home furnishing; building materials and garden supplies; sporting goods; general goods etc.   Together they constitute about 31.5 percent of total sales. But if you look at the sales numbers in the Census release, you’ll find that these guys aren’t having a great year. Their sales growth lags that of the entire retail sector. Clothing and sporting goods are doing okay, with sales gains of 5.9 percent and 6.1 percent, respectively, through the first ten months of the year.   Within general merchandise stores, the department store category is actually down .8 percent.  Sales for the furniture and home furnishing sector are up just 1.2 percent mostly due to inflation, electronics and appliances stores are up 0.2 percent and hardly measurable,  general merchandise is up just 3.5 percent.  Keep in mind that all these numbers don’t account for inflation, which is a factor in many of these increased numbers.

Officials gave varying accounts of a "huge explosion" in the ancient city, which hosts one of Iran's main facilities for refining uranium...