We doubt many will be surprised by the latest presidential polling update from Gallup, and certainly not the record nearly 50 million Americans on foodstamps, but here it is nonetheless, from US News: “President Obama’s slow ride down Gallup’s daily presidential job approval index has finally passed below Jimmy Carter, earning Obama the worst job approval rating of any president at this stage of his term in modern political history.

Since March, Obama’s job approval rating has hovered above Carter’s, considered among the 20th century’s worst presidents, but today Obama’s punctured Carter’s dismal job approval line. On their comparison chart, Gallup put Obama’s job approval rating at 43 percent compared to Carter’s 51 percent.” One can only imagine what would happen to Obama’s ratings if indeed the Iranian hostage situation escalated and the president was forced to get involved, in addition to oil spiking to “doomsday” levels of course as Pimco’s worst case predicts: “Back in 1979, Carter was far below Obama until the Iran hostage crisis, eerily being duplicated in Tehran today with Iranian protesters storming the British embassy.

The early days of the crisis helped Carter’s ratings, though his failure to win the release of captured Americans, coupled with a bad economy, led to his defeat by Ronald Reagan in 1980.” And while some may say this is merely a one time blip, a longer-term average shows otherwise: “Gallup finds that Obama’s overall job approval rating so far has averaged 49 percent. Only three former presidents have had a worse average rating at this stage: Carter, Ford, and Harry S. Truman. Only Truman won re-election in an anti-Congress campaign that Obama’s team is using as a model.” On the other hand, neither Ford nor Carter has such erudite opponents as Herman “I did not sleep with those 999 women” Cain.

Here are the job approval numbers for other presidents at this stage of their terms, a year before the re-election campaign:

That’s right. Not one, but both Bushes…

And here it is graphically via Gallup. 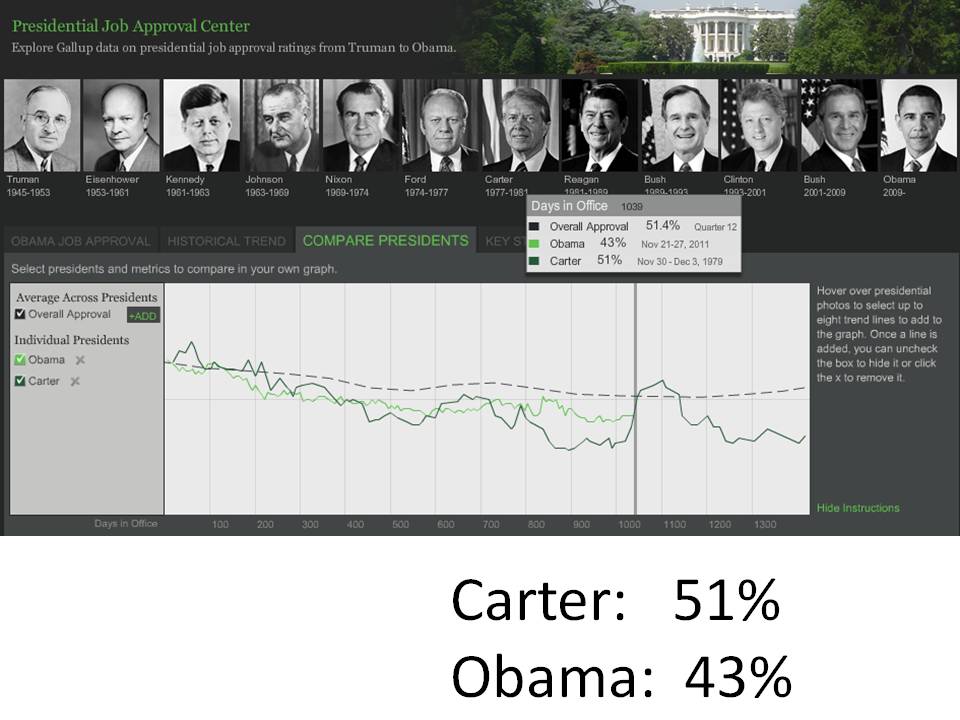 In Case You Missed It:  JUST IN: Sam Bankman-Fried’s Ex Girlfriend Caroline Ellison is Cooperating with Prosecutors After Pleading Guilty to Charges of Fraud and Conspiracy
Posted in Tyranny and tagged Carter, Election, Obama.

The Red Card Solution: A Different Approach to Immigration, Prosperity, and Security

Following last week’s GOP presidential debate, the phrase “red card” has been thrown around quite a bit. No, we’re not...