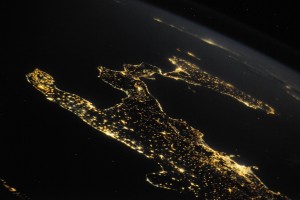 “Global banks’ exposure to Italy dwarfs their exposure in the three eurozone countries that have already been bailed out – Greece, Portugal and Ireland. In fact, at $262bn, the aggregate sovereign claims of foreign banks on Italy exceed  their combined sovereign exposures to Greece, Ireland, Portugal and Spain, which total about $226bn, according to research by analysts at Collins Stewart.”

“French banks hold nearly $98bn worth of Italian sovereign debt, while Germany holds $51.2bn, according to the Bank for International Settlements. Italy is such an integral part of the financial system that most developed countries have a material exposure – Japan, for example, has a sovereign exposure of $29bn, according to Collins Stewart.  Within Italy itself, about 65 per cent of domestic banks’ own equity is exposed to the sovereign [debt], according to the Bank for International Settlements.”

In other words: Default by Italy on its bonds will bring down Italian banks, and severely shake banks in France and in Germany.

How close is Italy to default?  Close.  In the past year, interest rates on Italian bonds have risen to three percentage points higher than rates on German bonds.  Why? According to The Economist, “the recent anxiety was caused in part by Silvio Berlusconi, the prime minister, stepping down, and disagreements he had with the finance minister, and by uncertainty over the passage of an austerity bond that hit the market ‘soft’ this month.”

What a superb time for Italy’s former skirt-chasing Prime Minister to quarrel with the Finance Minister.  The $68 b. budget cut passed Italy’s Parliament – but its shaky government and embattled PM bode ill.

While everyone watches Greece, Italy has begun a dangerous slide down the slippery slope of higher interest rates, rising risk premiums and increasing difficulty to recycle its bonds. According to one expert, if the risk premium on Italian Government bonds rises to 5 percentage points above German bunds, Italy will be bankrupt.  Right now, the gap is 3.  It is worth thinking carefully what it might mean if Italy needs a bailout. Who will bail it out?  By how much? What will be the terms?  I expect a lot of European bankers and officials are losing a lot of sleep over Italy.  Greece, in comparison, will seem like a tea party.

In Case You Missed It:  Get Ready for the Economic Collapse
Posted in Financial and tagged Debt, Debt Crisis, Euro, Europe.

Top officials willfully concealed the true extent of the 2008-'09 bailouts from Congress and the public. We now have concrete...