Christians are in imminent danger across the world, and yet they are being refused refugee status, while Muslim refugee immigration goes on unimpeded.

U.S. policy regarding refugee resettlement would shock most Americans if they only knew. The United Nations picks who gets to come to the U.S. as a refugee. The mandate of the U.N. High Commissioner for Refugees (UNHCR) is to determine which of the world’s huddled masses comes to the U.S. as humanitarian refugees. And predictably, this U.N. body is favoring Muslims. Christians from Muslim lands are being refused refugee status. 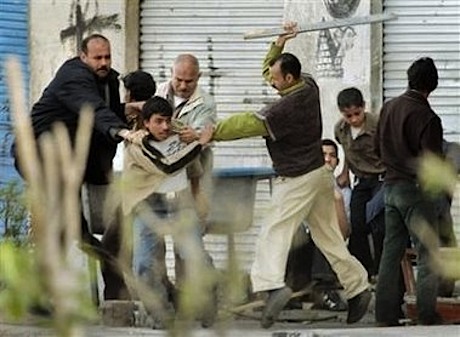 This is no accident. We know that the U.N. is driven largely by its largest bloc of countries, the Organization of Islamic Cooperation. The OIC is one of the largest intergovernmental organizations in the world. It is a religious and political organization with ties to the Muslim Brotherhood, an organization dedicated in its own words to “eliminating and destroying Western civilization from within.”

It is horrifying but true that Afghan Christians are being refused refugee status by the U.N. and many Western nations, including Great Britain. The U.N. claims that Afghan Christians do not meet the criteria for refugee status that is stipulated in Statute 6B of the UNHCR, which requires refugees to have “a well founded fear of persecution by reason of his race, religion, nationality or political opinion.”

s this why we expended incalcuable blood and treasure in Afghanistan? So that Christians would face persecution and slaughter? What was the objective? Shariah?

UNHCR trends for 2006 indicated that worldwide there were more than 32.9 million “persons of concern,” including around 11 million who were designated as “refugees.” Most of these came from Somalia, Darfur in the Sudan, Ethiopia, Iraq, Pakistan and Myanmar – all Muslim countries except Myanmar and Ethiopia (which has a huge Muslim population). That means that many refugees from these countries are non-Muslims seeking to escape religious persecution. But they are just the ones being denied.

The U.S. ranks third among the world’s nations in the number of refugees we host. Since 1976, millions of new citizens have entered the United States as legal humanitarian refugees, according to reports from the U.S. State Department. The large groups of Somalis that have recently come to the U.S. are certified as “humanitarian refugees” under our State Department rules. Whole Muslim communities are imported into the United States. When they get here, they are supported by social services provided by the Office of Refugee Resettlement of the U.S. Department of Health and Human Services. The cities that receive these huge numbers of refugees are.

Humanitarian refugees have literally won the proverbial lottery. Typically, they receive green cards as resident aliens within a year of arrival in the U.S. and are eligible to become full U.S. citizens within five years, unless they violate our immigration laws, commit a felony or are deported. In the process, they are provided with cash stipends and social services assistance from federal, state, NGOs and voluntary agency contractors.

But this lottery is not open to non-Muslim refugees. Back in October 2008, Muslim U.N. employees were “discouraging” applicationsfor resettlement from the desperate Christian Iraqis. The Christian Iraqi population has since been decimated: Over half of the pre-war Christian population of Iraq has now fled the country.

By buying into the argument that Islam is a religion of peace and ignoring the penalties for apostasy, we are sentencing thousands of Christians to martyrdom and forcing others to live in the shadows in dire poverty.