(Los Angles Times) The Sentinel drone has cutting-edge stealth and surveillance technology that other nations could exploit. One of the aircraft crashed in Iran, and a U.S. official says it was on a CIA mission.

Photographs of the Sentinel first surfaced online in 2009 at a remote airfield in Kandahar, Afghanistan. The drone received the nickname “the beast of Kandahar.”

The drone resembles a miniature version of the B-2 stealth bomber. The bat-wing design is meant to make it less likely to pop up on enemy radar screens. Also like the B-2 bomber, the Sentinel is thought to have high-tech coatings that act like a sponge to absorb radar waves as they strike the plane. 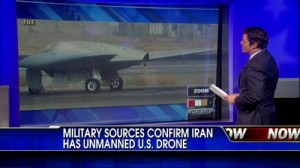 The Sentinel’s design is a quantum leap from the MQ-1 Predator and MQ-9 Reaper drones well-known for hunting terrorists in the Middle East. Those drones, made by General Atomics Aeronautical Systems Inc. of Poway, Calif., are propeller powered, non-stealthy and not designed to be flown in contested airspace.

The Pentagon first publicly acknowledged the Sentinel’s existence in late 2009. The craft is known to be an unarmed spy drone.

Kevin Gambold, director of operations for Unmanned Experts, a British company that specializes in unmanned aerial vehicles, said the Sentinel, carrying an array of classified surveillance systems, would have a self-destruct mechanism to disable or destroy it if operators lost control.

He said it’s difficult to believe that Iran could have brought down the aircraft with electronic jamming or by taking the controls through a cyber attack as the country claims it did. “You never say never, but I would be gob-smacked and amazed if they even knew how,” Gambold said.

But in such cases, the drone should have a fail-safe mechanism that enables it to retrace its flight path and return to the base where it was launched, he said.

The most likely reason that the Sentinel didn’t self-destruct or safely return is that it was lost because of an onboard mechanical malfunction, said Thompson of the Lexington Institute.

“That means what the Iranians have is a pile of wreckage — many small and damaged pieces from which they could glean little in the way of technological insights,” he said.

Still, pieces of stealth technology may have found their way into foreign military hands before.

This year, China said it had developed and built a stealth fighter jet, dubbed Chengdu J-20. U.S. military officials believe that the Chinese used technology collected from a F-117 stealth aircraft that was shot down over Serbia in 1999 during the Kosovo war. Chinese agents were said to have purchased parts of the plane, covered in high-tech stealth coating, from local farmers.

“The cat’s already out of the bag with stealth technology,” said John Pike, director of GlobalSecurity.org, a website for military policy research.

“The materials have already been widely disseminated. One little drone isn’t going to make a difference either way.”

New intelligence indicates that North Korea is moving ahead with building its first road-mobile intercontinental ballistic missile, an easily hidden...