New intelligence indicates that North Korea is moving ahead with building its first road-mobile intercontinental ballistic missile, an easily hidden weapon capable of hitting the United States, according to Obama administration officials.

The intelligence was revealed in a classified Capitol Hill briefing last month. Its existence was made public in a letter to Defense Secretary Leon E. Panetta from five House Republicans. 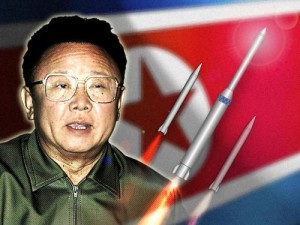 “As members of the House Armed Services subcommittee on strategic forces …, we write out of concerns about new intelligence concerning foreign developments in long-range ballistic missile development, specifically ballistic missiles capable of attacking the United States,” the Nov. 17 letter said.

“We believe this new intelligence reiterates the need for the administration to correct its priorities regarding missile defenses, which should have, first and foremost, the missile defense of the homeland.”

Other intelligence indicates that the new ICBM may be under development at a huge missile testing facility on North Korea’s western coast.

Prior to its mobile ICBM, North Korea’s long-range missiles were the pad-launched Taepodong-1 prototype, and the Taepodong-2 (TD-2) dual-use ICBM and space launcher. The TD-2 was test-launched in April 2009.

Mobile missiles are difficult for tracking radar to locate, making them easier to hide. They also can be set up and launched much more quickly than missiles fired from silos or launchpads.

China’s military recently deployed two new mobile ICBMs, the DF-31 and DF-31A. It is not known whether North Korea’s new mobile missile is based on Chinese technology. China in the past has provided missile technology to North Korea, a fraternal communist ally.

The first indications of Pyongyang’s new mobile ICBM were made public in June by Robert M. Gates, who was defense secretary at the time.

After a speech in Singapore, Mr. Gates said, “With the continued development of long-range missiles and potentially a road-mobile intercontinental ballistic missile and their continuing development of nuclear weapons, … North Korea is in the process of becoming a direct threat to the United States.”

The new intelligence was discussed during a closed-door briefing in mid-November for the House Armed Services subcommittee on strategic forces and discussed in the letter to Mr. Panetta. The letter did not say specifically that the missile was North Korean, but it quoted Mr. Gates on Pyongyang’s mobile ICBM development.

The letter was signed by Rep. Michael R. Turner, Ohio Republican and chairman of the subcommittee, and subcommittee Republican Reps. Mike Rogers of Alabama, Trent Franks of Arizona, Doug Lamborn of Colorado and Mac Thornberry of Texas.

Administration officials familiar with the missile data said U.S. intelligence analysts have some disagreement over the developments.

Last week, North Korea issued a government white paper that defended its April 2009 launch of a Taepodong-2 as part of a satellite development program.

Government analysts viewed the statement as an indication that North Korea may be preparing for a missile flight test.

The United Nations imposed unprecedented sanctions on North Korea after a 2009 test of a nuclear device.

One is using the Taepodong-2, with a range of up to 9,300 miles, as its main strategic missile. A second way is to further develop the ranges of existing missiles like the Musudan, and last is to “use the very large launch facility that is being constructed on the west coast of North Korea to launch a very large missile,” the cable said.

The cable said the size of the facility is a concern because “it does not simply replicate other sites.”

An Oct. 6, 2009, cable on North Korea’s missile program said the Musudan intermediate-range missile is based on Russia’s SS-N-6 submarine-launched missile that has a range of up to 2,400 miles.

The Musudan uses an advanced liquid propellent called unsymmetrical dimethylhydrazine (UDMH) and nitrogen tetroxide (N204) that are easier to store in missiles.

“Development of the Musudan with this more advanced propulsion technology allows North Korea to build even longer-range missiles – or shorter range missiles with greater payload capacity – than would be possible using Scud-type technology,” the cable said.

North Korea also has a new solid-fueled short-range missile called the Toksa, with a range of 75 miles, and has sold a number of shorter-range Musudan missiles to Iran, the report said.

In their letter, the five lawmakers called on the Pentagon to reverse its decision to curb development of long-range ground-based interceptors in favor of European-based missile defenses against Iranian missiles. They also asked for the Pentagon’s plan for a “hedging strategy” to be prepared to counter new missile threats like the North Korean mobile ICBM.

“In view of the briefing the subcommittee received this week, we do not believe the United States can afford further delay in the release of the hedging strategy by the Department of Defense,” they stated, asking for a report on the strategy by the end of the year.

Asked about the new intelligence, Cmdr. Leslie Hull-Ryde said the Pentagon had nothing to add to Mr. Gates‘ comments.

A U.S. intelligence community spokesman referred a reporter’s questions about the new intelligence to the February statement to Congress by James Clapper, director of national intelligence.

Mr. Clapper stated in his prepared remarks that “North Korea’s progress in developing the TD-2 shows its determination to achieve long-range ballistic missile and space-launch capabilities. If configured as an ICBM, the TD-2 could reach at least portions of the United States; the TD-2 or associated technologies also could be exported.”

Mr. Gates first told reporters Jan. 11 during a visit to China that North Korea’s progress in building intercontinental ballistic missiles was turning the Pyongyang regime into a “direct threat to the United States.”

“Let me be precise,” he added. “I think that North Korea will have developed an intercontinental ballistic missile within that time frame, not that they will have huge numbers or anything like that, but I believe they will have a very limited capability.”

The Daily Beast quoted Mr. Gates in June saying, “They are developing a road-mobile ICBM. I never would have dreamed they would go to a road-mobile before testing a static ICBM. It’s a huge problem. As we’ve found out in a lot of places, finding mobile missiles is very tough.”