Sen. Susan Collins on Wednesday blasted the Defense Department and the Obama administration for classifying the Fort Hood terror massacre as ‘workplace violence’,  she suggested political correctness is being placed above the security of the nation’s Armed Forces at home.

Collins a Republican from Main also referenced a letter from the Defense Department depicting the Fort Hood shootings as workplace violence.  She criticized the Obama administration for failing to identify the true threat which was al-Qaeda and radicalized Islam. 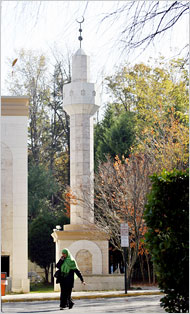 The entrance to the Dar al Hijrah Islamic Center in Falls Church, Va.,

Intelligence agencies originally  intercepted communications between the military psychiatrist Hasan whom murdered 13 people at Fort Hood, Tex., and a radical cleric in Yemen known for his incendiary anti-American teachings.  His name was Anwar al-Awlaki, once a ‘spiritual leader’ at a mosque in suburban Virginia where Major Hasan once worshiped and became radicalized.

Al-Awlaki left the United States to become the “regional commander” within the al-Qaeda terrorist organization in 2009.  He repeatedly called for jihad against the United States.  Al-Awlaki encouraged others to “fight jihad” he had a sermon in 2009 posted on his blog  “44 Ways to Support Jihad“.

After the Fort Hood shooting, on his website al-Awlaki praised Hasan’s actions, Hasan and Al-Awlaki communicated with at least 20 emails back and fourth before the Fort Hood terrorist act. Al-Awlaki acknowledged his correspondence with Hasan.  Somehow the Obama administration refuses to connect the dots with Hasan to al-Qaeda despite these communications.

Faisal Shahzad, convicted of the attempted car bombing of Times Square in May 2010, told interrogators that he too was “inspired by” al-Awlaki, as well as Seattle Weekly cartoonist death threat among many other threats throughout UK and the USA including a passenger plan plot, a stabbing of a British minister and a cargo plan plot.

Rep. Peter King of New York said: “There’s a definite threat from Islamic radicalization in various parts of our society, including within the military, and we can’t allow political correctness to keep us from exposing this threat for what it is.”

Also the chairman of the Senate Homeland Security Committee, Connecticut independent Sen. Joe Lieberman, said the military has become a “direct target of violent Islamist extremism” within the United States.

Is the Obama administration delusional or simply trying to knowingly mislead the American people as to the real motivation behind Hasans’ terrorist act?

When Pam Tebow was counseled to abort her baby to save her own life, the doctor referred to him as...