Who is responsible for Muslim violence? Anyone but Muslims. When Howard W. Gutman, Obama’s ambassador to Belgium, told his audience that Jews should be accepting responsibility for the violence practiced on them by Muslims, because it’s their own damn fault for insisting on having a Jewish state, the State Department wasn’t willing to stand behind his words, but neither did it disavow him. 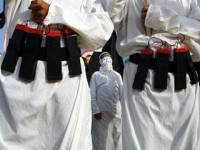 Imagine for a moment if Howard W. Gutman had adjusted his red hipster glasses and told his audience that Muslims should take responsibility for Islamic terrorism. Hillary would have personally fired him, after yelling at him for a good thirty minutes, and Obama would have issued an apology to the Muslim world. Every newspaper column on both sides of the Atlantic would have spent the better part of the week denouncing Islamophobia and clucking over how mainstream intolerance has become.

This week there has been another related controversy when the Republican Jewish Coalition failed to invite Ron Paul to its forum. Ron Paul has repeatedly blamed American foreign policy for Al-Qaeda terrorism. He even described the original World Trade Center bombing as a “retaliation”. In Paul’s mind every act of Muslim violence against us is a response to some original sin that we committed against them.

Paul’s view is common on the left, which calls every attack an opportunity for us to engage in deep soul searching until we can finally understand why Muslims hate us. But if we were to suggest that the next time our bombers fly over one of their cities, it’s an opportunity for Muslims to engage in some soul searching and work out why that sort of thing keeps happening, that’s another one of those completely inappropriate suggestions.

When Americans die, it’s blowback. When Muslims die, it’s more imperialistic warmongering by the running dog lackeys of the new world order. Muslims are responsible for nothing. We are to blame for everything. For what we do and for what they do.

Muslims are never told that a domestic policy discriminating against women and minorities, and a foreign policy based on supporting terrorists and then lying about it, might be causing them some blowback. Blowback is only for the CIA or the Mossad, it’s never for the ISI or the Mukhbarats (who as we all know are pawns of the CIA and the Mossad anyway).

To the far left and the far right, Muslims are our abused stepchildren. If they act out, then it’s because we didn’t treat them the right way. If we had, then we would have peaceful relations with them in accordance with the philosophies of progressive globalism or free market isolationism or platonian psychorealism.

Instead of treating Muslim civilizations as separate societies with their own concerns and priorities apart from us, Western liberals view Muslims as mirrors of their own society, identifying their anger as a symptom of some fault within ourselves. It never occurs to them that Muslim terrorism isn’t a knee-jerk response, it’s an affirmative action carried out to promote the spread of their way of life. That it’s a quasi-religious act with deep roots in Islamic history long predating the modern Western state.

The breadth of Islamic imperialism makes European imperialism look small and silly. Muslims ruled over major portions of Africa, Asia and the Middle East in places that Europeans rarely ventured for centuries. Islam conquered and held on to far more territory than Alexander or Rome, only the British Empire came anywhere close to its scope and did not manage to rule for a fraction of the time or convert as much of the native populace.

Talking about Islamic imperialism as if it were some sort of reflex reaction to Western support for the Shah or arms sales to Israel is so hopelessly stupid that it beggars belief, particularly when historians assert such a ridiculously narrow view of history. We might as well pretend that China is expanding its reach because it’s angry over the Opium War or jet fighter sales to Taiwan.

Expansionism is a natural imperative of civilizations. Empires or the splintered leftovers of empires strive to reconstitute their glory days. The failure to understand that Muslims are more than the bastards of that brief window of European colonialism, they are the scattered and divided pieces of a religious civilization aspiring to a renewal of empire or caliphate is behind every stupid opinion on Islam.

Treating them like abused children who have to be cadged into attending international therapy sessions with us is stupid and destructive. The Muslim world is destructive enough without being infantilized further. And the left has taken up the white man’s burden in another form, treating the rest of the world as if it can’t move on until the West atones for its sins.

The Muslim world has a booming population, a surplus birth rate, concentrations of wealth and a lot of spare weapons… and it’s doing what comes naturally with those things, invading other countries with lower birth rates and trying to take them over. That has been the pattern of human civilizations long before the ivory tower and the academic text. It is sheer arrogance to imagine that it would change because the descendants of Richard the Lionheart, Philip II and Leopold V decided to practice war no more, except for humanitarian reasons.

Who is responsible for all that? They are. Muslims are not robots or steel balls in a pinball machine, acts of violence, whether by individuals or entire countries are premeditated and have specific objectives. The bygone left insisted that a mugging was a reflex response to class distinctions, not a voluntary action by a living, breathing human being. Now it acts as if Muslim terrorism is a reflex to another Jewish family moving into a house in Israel or some fellow torching a Koran.

This pernicious nonsense robs us of our rights to life and property in the name of appeasement, and it robs Muslims of something even more precious, their own personhood. Muslims, like the rest of us, are moral actors, with the power to make choices and to accept their consequences. Every time the left acts as if Muslims don’t have that ability, as if they are fuses that we light, they deny that Muslims are moral actors, rather than inert substances that are being acted upon.

Treating other people as extensions of ourselves is dysfunctional. Treating a billion people that way is dangerously delusional. But it’s not a one-sided delusion.

To Muslims, we are acting out our part in their apocalyptic endgame and to our cultural elites, they are acting out a role in our post-colonial narrative. The first step in breaking that cycle is to assert that they are responsible for their actions. That history did not begin in 1917 or 1948 and that it has moved on quite a bit since. We are not the prisoners of history, nor are we the jailers of the Muslim world. The only prison they are in is the one that they have built around themselves with a backward ideology.

We cannot meaningfully address the Clash of Civilizations until we recognize it for what it is, a natural and inevitable collision fueled by ideology and greed. And we cannot address the violence that it has brought to our shores until we hold those who carry out that violence and who support that violence responsible for their actions.

It is not enough to condemn terrorism. It is more important to assign responsibility to the actors and to discuss their motives. Anger alone does not make for a war. Resentment may fuel rebellions, but it doesn’t extend to conquests. Nazi Germany wasn’t simply angry over the aftermath of WWI, its leaders headed up an oligarchy that began by looting the Jews and then set out to loot all of Europe. The Soviet Union wasn’t driven by class warfare or ideology alone, but by power and greed.

If all the theorists unknotted their keffiyahs for a moment and actually thought about what the Muslim world has to gain from Muslim violence, then they might actually have something rational to contribute to the conversation. Instead we get impassioned lectures on justice and dogmatic interpretations of what justice is.

When Howard Gutman justifies the beating of an 18-year-old Jewish girl in Belgium by pointing to the settlements, it never seems to occur to him that the reason her attackers beat her is because they could. Because they wanted to beat someone. Her Jewish identity only meant that she was fair game, as Jews have been fair game for violence in the Muslim world for over a thousand years. It did not originate the violence, it only channeled it in a socially acceptable manner. Socially acceptable in the Muslim world and in the Obama Administration.

We are responsible. Not for the violence, but for tolerating it. Bomb me once, shame on you. Bomb me three hundred times, shame on me. Not only do we tolerate Muslim violence, but we excuse it and we buy into the narrative of our attackers which they use to justify their actions. Instead of taking on the responsibility of ending their violence, we take on the responsibility for causing it, and thereby, in the manner of the bullied with the bully, perpetuate the violence.

Daniel Greenfield is a New York City based writer and freelance commentator. “Daniel comments on political affairs with a special focus on the War on Terror and the rising threat to Western Civilization. He maintains a blog at Sultanknish.blogspot.com.

Daniel can be reached at:[email protected]