Iranian state television broadcast images this morning of what they purport to be a downed U.S. RQ-170 Sentinel drone.

The host of the program in the video below stated the Iranian Army’s electronic warfare unit “hacked into the signal” and landed the drone, which explains why it looks to be in pristine condition. 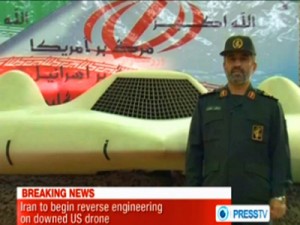 Certainly if Iran, Russia and China could reengineer drones for themselves and their allies it would become a major problem for U.S. forces, particularly since it could become a rather anonymous way to assassinate their foreign and domestic opposition. Sooner or later it would be used against U.S. forces- even if those forces were stationed in allied countries, such as Germany.

Further, it would be just a matter of time before targets within the U.S., such as C.I.A. chiefs, current and former presidents or military brass, could become drone targets. This is very bad news. Drones are rigged to self-destruct, for some reason this one failed to do so.

Unless this was planted and is really a Trojan horse intended for capture, otherwise its really bad news. There was reports earlier in the month that hinted the drones had a virus, The Pentagon claimed it didn’t affect the operation of the drone, is that virus linked to this capture is yet to be known. A question to be asked is why did the self destruct mode not activate, certainly we know these drones have GPS meaning the USA knows it location even currently, why not take it out. Is is a precursor for something else to come?

The Iranian Foreign Ministry has also summoned a delegate form the Swiss Embassy in Tehran to officially protest the breach of Iranian airspace, Iran’s state TV reported. (Switzerland represents the United States in Iran in the absence of Iran-US diplomatic ties)

In Case You Missed It:  An empire that can't feed its babies is an empire in COLLAPSE ... America fails to do what off-grid jungle tribe villagers can do quite readily
Posted in Freedoms, Terrorism and tagged Iran, Switzerland, Terrorism, United Socialist States of America.

The Knesset's Education Committee witnessed an exchange of verbal fire Wednesday between nationalists and leftists, as it discussed a report...