The bloody drug war in Mexico shows no sign of relenting. Neither do calls for tighter border security from the Whitehouse amid rising fears of spillover violence and drugs. 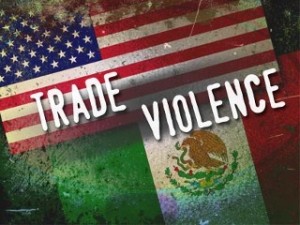 This hardly seems a time the U.S. would be willing to allow people to cross the border legally from Mexico without a customs officer in sight. But in this West Texas location where wading across the shallow Rio Grande undetected is all too easy, federal authorities are touting a proposal to open an unmanned port of entry as a ‘security upgrade’.

By the spring, kiosks could open up in Big Bend National Park allowing people from the Mexican town of Boquillas del Carmen to scan their identity documents and talk to a customs officer in another location via video, at least 100 miles away.

The crossing, which would be the nation’s first such port of entry with Mexico, has sparked opposition from some who see it as counterintuitive in these days of heightened border security. .

“People that want to be engaged in illegal activities along the border, ones that are engaged in those activities now, they’re still going to do it,” is the rational behind some liberals.

The proposed crossing from Boquillas del Carmen leads to a vast expanse of rolling scrub, cut by sandy-floored canyons and violent volcanic rock outcroppings. The Chihuahuan desert wilderness is home to mountain lions, black bears and roadrunners, sparsely populated by an occasional camper and others visiting the 800,000-acre national park. Liberals are worried an attack from a Mountain lion could happen and want to make access easier.

Customs and Border Protection, which would run the port of entry, argue the proposal is a safe way to allow access to the town’s residents, who currently must travel 240 road miles to the nearest legal entry point. It also would allow park visitors to visit the town.

In addition to the problems, the cost is estimated to be $2.3 million, which has support at the highest levels of Obama’s administration including the president himself.

A U.S. Rep. Michael McCaul, a Texas Republican member of the House Homeland Security committee, questioned the wisdom of using resources to make it easier to cross the border.

“We need to use our resources to secure the border rather than making it easier to enter in locations where we already have problems with illegal crossings,” McCaul said in an email. “There is more to the oversight of legal entry than checking documents. (U.S. Customs and Border Protection) needs to be physically present at every point of entry in order to inspect for drug and weapons contraband, detect suspicious behavior and, if necessary, act on what they encounter.”

In 2001 a Hezbollah terrorist from Lebanon who had received “specialized training in radical Shiite fundamentalism, weaponry, spy craft and counterintelligence in Lebanon and Iran illegally cross into the United States from Mexico. Kourani got into Mexico during the height of this Al Qaeda campaign, in February 2001, by paying a $3,000 bribe to an official in the Mexican consulate in Beirut.

Then, on Feb. 4, 2001, a now-shuttered Tijuana-based smuggling ring that had moved hundreds of other Lebanese nationals drove him over in the trunk of a car. Now they can just walk over. There have been numerous illegal crossings of known terrorist from Mexico into the United States.

A U.S.-bound Pakistani Muslim man captured in Mexico apparently was considered so dangerous he was remanded to military custody at Guantanamo Bay, Cuba, testifying about his Mexico travels before a tribunal. The partial story of the Pakistani is revealed in a heavily redacted hearing transcript that was one of thousands the government was forced to release on a web site after an Associated Press Freedom of Information lawsuit in May 2005.

Despite the numerous potential problems, National Park Service is building the contact station just above the Rio Grande. It will house CBP kiosks where Mexican crossers and anyone else will be trusted to scan in their documents and talk to a customs officer via video to a remote location.

Similar ports of entry are already in operation on remote parts of the border with Canada and present their own problems. A Palestinian man Gazi Ibrahim Abu Mezer, convicted in 1998 of plotting to bomb a New York subway, illegally entered the United States through an unmanned Canadian crossing. Open sections of the U.S.-Canadian border and soon to be Mexican crossings, present major security vulnerabilities for the United States, increasing the chance that individuals could smuggle radioactive materials into the country without being detected, government investigators have found.

On three different occasions, Government Accountability Office investigators probed apparently unmonitored and unmanned sections of the northern border, finding that they could sneak from Canada into the United States undetected even while carrying a red duffel bag to simulate the smuggling of radioactive materials or other contraband.

US officials discouraged such informal crossings in 2002 after the Sept. 11 terrorist attacks prompted calls for tighter border security, how quickly we forget.

In Case You Missed It:  Another Blatant Lie By Biden Exposed, Americans Savings Are at Lowest Point in a Decade
Posted in Tyranny and tagged Border, Illegal Immigration, Mexico, Obama, United Socialist States of America.

OAKLAND, Calif. (AP) — Occupy Wall Street protesters want to shut down ports up and down the West Coast on...