OAKLAND, Calif. (AP) — Occupy Wall Street protesters want to shut down ports up and down the West Coast on Monday in a bid to gum up the engines of global commerce.

But organizers who are partly billing this effort as a show of solidarity with longshoremen have not won the support of the powerful union representing thousands of dock workers. 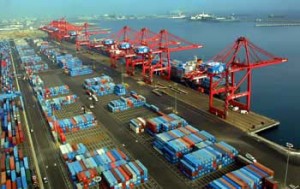 The tension between the century-old International Longshore and Warehouse Union and a still-young protest movement has complicated an ambitious effort by Occupiers to build an identity that is bigger than their recently dismantled tent camps. Without the support of workers who make the docks run, the protesters will be forced to rely on sheer numbers and their own devices to blockade sprawling ports from San Diego to Alaska.

Longshoremen spearheaded San Francisco’s iconic 1934 general strike that ended with two strikers gunned down by police and a stronger contract for waterfront workers.

Any action on behalf of longshoremen should also be led by the workers themselves, the union’s current president said.

“Support is one thing, organization from outside groups attempting to co-opt our struggle in order to advance a broader agenda is quite another,” Robert McEllrath wrote in a Dec. 6 letter to ILWU locals.

The key issue for targeting the ports is a longstanding dispute between longshoremen and grain exporter EGT at the Port of Longview along the Columbia River in Washington. The protesters say companies like EGT represent “Wall Street on the waterfront” and believe rank-and-file longshoremen support the shutdown, regardless of what union leaders say.

But under the terms of the ILWU contract, West Coast longshoremen cannot simply walk off the job en masse to support the shutdown, though individual union members can choose to exercise their First Amendment rights and not show up at the hiring hall that day.

From its roots in the San Francisco general strike, the ILWU has a strong history of taking a stand on issues of the day, from civil rights to the Iraq War to apartheid in South Africa. One union member cited that tradition in calling for members to support the shutdown.

“We don’t cross community picket lines,” longshoreman Clarence Thomas, a member of Oakland’s Local 10 and a longtime community activist, said in an interview posted on the port shutdown website. “When people begin to do so, they have completely turned their backs on the ILWU’s 10 guiding principles,” one calling on longshoremen to respect every picket line “as though it were our own.”

Organizers say the shutdowns are meant to highlight what they see as abuses inflicted by wealthy companies taking place well beyond Wall Street itself. They also hope to show that Occupy activists can still muster a major national protest despite the scattering of their camps by police raids.

“Even though there’s not an encampment, there’s still a huge movement,” said Barucha Peller, who is part of the Oakland Occupy group that launched Monday’s planned blockade and successfully forced a shutdown of the Port of Oakland in November.

But Dan Coffman, president of ILWU Local 21, which represents the Longview longshoremen, said the movement does not speak for him and his workers. Blockade organizers in press releases and a video posted online have featured Coffman’s appearance at an Occupy Oakland rally. Coffman said his trip to California was mainly to thank longshoremen there for sending money to support their picket lines in the EGT dispute.

“As far as the shutdown of the ports, we have no involvement with that whatsoever — none,” Coffman said.

If longshoremen still come to work, Occupiers could have a tough time bringing commerce to a halt, since most major West Coast ports appear too big to completely block.

Oakland could prove the exception: with one major entrance and exit, demonstrators already showed last month that they could close down one of the nation’s busiest shipping centers. The Port of Oakland has taken out ads urging city residents not to support the shutdown, which port officials said would steer traffic to other ports and hinder its job-creation initiatives.

In Southern California, the ports of Los Angeles and Long Beach together handle more than twice as much shipping container traffic as any other U.S. port. Rather than trying to shut down the entire complex along several miles of waterfront, protesters will target the shipping terminal of SSA Marine Inc., which is partly owned by an investment fund managed by Goldman Sachs.

Protesters accuse the company of exploiting port truckers by classifying them as independent contractors instead of regular employees.

Company spokesman Bob Watters said SSA leases trucks that meet the port’s strict emissions standards to drivers who could not otherwise afford them.

Support of the shutdown among the rank-and-file may not be put to the test in some cities if sizeable protests erupt. Under the terms of the longshoremen’s contract, union officials say blockades by protesters could result in the declaration of unsafe working conditions, which would exempt workers from having to show up.

The overnight shutdown of the Port of Oakland on Nov. 2 resulted from such a declaration.

Whether or not Monday’s protest draws enough participants to have that kind of impact could depend on how much backing the blockade effort gets from other unions. The November march on the Port of Oakland included a strong contingent from organized labor, and the day’s general strike was publicly supported by Oakland’s teachers union and the local chapter of the Service Employees International Union.

SEIU Local 1021 has not said whether it will support Monday’s port shutdown effort. Oakland teachers have voted to get behind it, said Oakland Education Association President Betty Olson-Jones, who added that she hopes the Occupy movement and organized labor can figure out how to join forces in the run-up to the 2012 presidential election.

A Syrian living in Turkey shouts slogans during a protest against the government of Syria's President Bashar al-Assad Syria remains...