As 2011 draws to a close, it’s worth looking back at some of the year’s most foolish comments from inside the Obama administration. If Academy Awards were handed out for political folly, the Obama team would be sweeping the board come Oscar time. It hasn’t been an easy task narrowing the list down to a mere ten – it could easily have been a top 20 or 30. The list has a strong foreign policy bias (not least as this is a British-based blog): I’ve omitted many candidates on the domestic front that would certainly qualify for inclusion. But here goes: 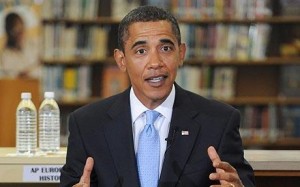 1. Barack Obama calls himself the fourth best president in US history

Not a man known for his modesty, Barack Obama told “60 Minutes” in December that his accomplishments are up there with the likes of Abraham Lincoln, which is a stretch considering that even Jimmy Carter is looking good by comparison. Judging by his track record since taking office, perhaps he really meant 44th best rather than 4th? Here is what he declared in his interview with CBS:

The issue here is not gonna be a list of accomplishments. As you said yourself, Steve, you know, I would put our legislative and foreign policy accomplishments in our first two years against any president – with the possible exceptions of Johnson, FDR, and Lincoln – just in terms of what we’ve gotten done in modern history. But, you know, but when it comes to the economy, we’ve got a lot more work to do. And we’re gonna keep on at it.

Even by the vice president’s standards, his comparison of the Tea Party to terrorists in August represented a new low. His hugely offensive remarks were symbolic of a presidency in decline, lashing out at political opponents in a show of crass desperation. According to a report byPolitico, based on eyewitness accounts:

Vice President Joe Biden joined House Democrats in lashing tea party Republicans Monday, accusing them of having “acted like terrorists” in the fight over raising the nation’s debt limit. Biden was agreeing with a line of argument made by Rep. Mike Doyle (D-Pa.) at a two-hour, closed-door Democratic Caucus meeting.

“We have negotiated with terrorists,” an angry Doyle said, according to sources in the room. “This small group of terrorists have made it impossible to spend any money.”

Biden, driven by his Democratic allies’ misgivings about the debt-limit deal, responded: “They have acted like terrorists,” according to several sources in the room.

In January, President Obama gave Britain the boot once again when he declared France to be America’s strongest ally during a White House press opportunity with Nicolas Sarkozy (view the C-Span video at 2:45 for the remark.) As I noted at the time, quite what the French have done to merit this kind of high praise from the US president is difficult to fathom, not least with France’s track record of knifing the United States in the back over the Iraq war. In the words of Barack Obama: “We don’t have a stronger friend and stronger ally than Nicolas Sarkozy, and the French people.”

4. Joe Biden on the Taliban: “not our enemy”

Another surreal statement from Joe Biden, this time in a Decemberinterview with Leslie Gelb of Newsweek (hat tip: The Weekly Standard.) While US forces are fighting and killing the Taliban in Afghanistan, who provided safe haven for al-Qaeda when it launched the 9/11 attacks, Biden undercuts them with a statement of monumental stupidity in the midst of a major war:

Look, the Taliban per se is not our enemy. That’s critical. There is not a single statement that the president has ever made in any of our policy assertions that the Taliban is our enemy because it threatens US interests. If, in fact, the Taliban is able to collapse the existing government, which is cooperating with us in keeping the bad guys from being able to do damage to us, then that becomes a problem for us.

Only the Obama White House could actually come up with a phrase like“leading from behind” and actually see it as a positive. It emerged in a major New Yorker piece published in May assessing the president’s approach on Libya and the Arab Spring, and has since been widely used to mock the Obama administration’s weak-kneed foreign policy:

Nonetheless, Obama may be moving toward something resembling a doctrine. One of his advisers described the President’s actions in Libya as “leading from behind.” That’s not a slogan designed for signs at the 2012 Democratic Convention, but it does accurately describe the balance that Obama now seems to be finding. It’s a different definition of leadership than America is known for, and it comes from two unspoken beliefs: that the relative power of the US is declining, as rivals like China rise, and that the US is reviled in many parts of the world. Pursuing our interests and spreading our ideals thus requires stealth and modesty as well as military strength. “It’s so at odds with the John Wayne expectation for what America is in the world,” the adviser said. “But it’s necessary for shepherding us through this phase.”

In February I wrote that “unsavoury organisations usually pay large amounts of money to glitzy PR firms to improve their public image. In the case of Egypt’s Muslim Brotherhood however, the Obama administration has offered its services for free.” I was referring to James Clapper’s extraordinary testimony before a House Intelligence Committee hearing on Capitol Hill, where he described the Islamist group as a peaceful,“largely secular” organisation that “eschewed violence”. Former US Ambassador to the United Nations John Bolton charitably described the remarks as “perhaps the stupidest statement made by any administration in US international history.” Here is what Clapper told Congress:

“The term ‘Muslim Brotherhood’ … is an umbrella term for a variety of movements, in the case of Egypt, a very heterogeneous group, largely secular, which has eschewed violence and has decried al-Qaeda as a perversion of Islam… there is no overarching agenda, particularly in the pursuit of violence…”

7. The US Ambassador to Belgium blames Israel for some forms of anti-Semitism

Not to be outdone by James Clapper’s ridiculous testimony, US Ambassador to Belgium Howard Gutman sparked outrage in Decemberwith his comments suggesting Israel should shoulder the blame for some forms of anti-Semitism, remarks that even the Obama administration itself tried to disown. According to a report by Haaretz, Gutman declared:

“A distinction should be made between traditional anti-Semitism, which should be condemned, and Muslim hatred for Jews, which stems from the ongoing conflict between Israel and the Palestinians,” Gutman reportedly told those gathered, going on to argue that “…an Israeli-Palestinian peace treaty will significantly diminish Muslim anti-Semitism.”

It’s fair to say that the Obama administration’s approach to the Middle East has been one of incompetence matched only by naïveté. From extending the hand of friendship to the Iranian regime through to a complete misreading of the situation in both Egypt and Syria, the Obama team has been out of its depth, demonstrated by Hillary Clinton’s assessment of the situation in Egypt in the final days of the Mubarak regime, given here during remarks with Spanish foreign minister Trinidad Jimenez in Washington on January 25, two weeks before Mubarak fell on February 11:

But our assessment is that the Egyptian Government is stable and is looking for ways to respond to the legitimate needs and interests of the Egyptian people.

9. Hillary Clinton refers to Syrian dictator Assad as a “reformer”

The Secretary of State was woefully caught out as well on Syria, hesitating to forcefully condemn the brutal repression meted out by the Syrian regime against democracy protestors. Asked in March on CBS’s“Face the Nation” why the US administration was adopting a far softer approach towards Bashar al-Assad compared to Colonel Gaddafi in Libya she explained that Syria was led by a “reformer”, albeit one who subsequently went on to butcher more than 3,000 people:

There’s a different leader in Syria now. Many of the members of Congress of both parties who have gone to Syria in recent months have said they believe he’s a reformer.

10. Barack Obama refers to the “English Embassy” in Tehran

Does the president of the United States actually know the difference between England and Great Britain? Apparently not, judging by his comments following the storming last month of the British Embassy in Tehran:

On that score, I think it’s important for me to just note that all of us, I think, are deeply disturbed by the crashing of the English embassy – the embassy of the United Kingdom in Iran. That kind of behavior is not acceptable. And I strongly urge the Iranian government to hold those who are responsible to task.

What Really Motivates the ‘Occupy’ Protesters?

“Occupy” protesters wear their movement’s leaderless decentralization on their collective sleeve. The attitude fits with a group that claims “democracy”...