Do you believe that 2012 will be more difficult for the global economy than 2011 was?  Well, that is what German Chancellor Angela Merkel believes.  The woman that has become the most important politician in Europe recently declared that 2012 “will no doubt be more difficult than 2011”.  The funny thing is that she has generally been one of the most optimistic public figures in Europe throughout this debt crisis.  But now even Merkel is openly admitting that 2012 is going to be a really, really bad year.  Sadly, most Americans simply do not understand how important Europe is or how interconnected the global financial system has become. 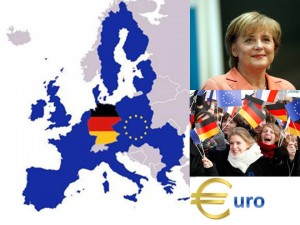 The United States actually has a smaller population and a smaller economy than the EU does.  In fact, the EU has an economy that is nearly as large as the economies of the United States and China combined.  The EU also is home to more Fortune 500 companiesthat the U.S. is, and the European banking system is far larger than the U.S. banking system.  Anyone that does not believe that a financial collapse in Europe will have a devastating impact on the U.S. economy is living in a fantasy world.  Americans better start paying attention to what is going on over there, because we are about to be broadsided by a massive financial tsunami originating out of Europe.

It is not just Angela Merkel that is warning that 2012 is going to be a difficult year.  The following are several more very prominent individuals that are warning that bad times are on the way….

“Europe is likely to have a meaningful recession in 2012”

*Christian Lagarde, the head of the IMF, recently said that we could soon see conditions “reminiscent of the 1930s depression” and that no country on earth “will be immune to the crisis”.

“Time is running out fast.  I think we have maybe a few months — it could be weeks, it could be days — before there is a material risk of a fundamentally unnecessary default by a country like Spain or Italy which would be a financial catastrophe dragging the European banking system and North America with it.”

* Even Paul Krugman of the New York Times is sounding quite apocalyptic….

“At this point I’d guess soaring rates on Italian debt leading to a gigantic bank run, both because of solvency fears about Italian banks given a default and because of fear that Italy will end up leaving the euro. This then leads to emergency bank closing, and once that happens, a decision to drop the euro and install the new lira. Next stop, France.”

I have written quite a bit recently about all of the signs that parts of Europe have already entered a recession.

Well, in just the past few days even more numbers have been released that indicate that a recession has now begun in Europe…..

-Manufacturing activity in the euro zone has fallen for five months in a row.

-Bad loans in Spain recently hit a 17-year high and the unemployment rate is at a 15-year high.

-Government revenues in Spain have not been up to the level that was expected.  The Spanish government just announced that the budget deficit for 2011 is going to end up being much larger than anticipated.

-Unfortunately, it appears that virtually all sectors of the Spanish economy seem to be slowing down….

The central bank said early indicators show that Spanish tourism, exports, spending and investment have been hit, which is likely to have led to a contraction in GDP in the fourth quarter.

Of course one of the most alarming things happening in Europe is the rapid contraction of the money supply.  It is almost impossible to avoid a recession when the money supply shrinks substantially.  The following comes from an article a few days ago in the Telegraph….

Simon Ward from Henderson Global Investors said the ECB’s “narrow” M1 money figures – tracked for clues on shorter-term spending patterns – show a drastic divergence between the North and South of the eurozone. “Parts of the core may avoid recession but there is no light at the end of the tunnel for the periphery. Real M1 deposits in Greece and Portugal have been falling at an annual rate of roughly 20pc over the last six months,” he said.

Right now, the rest of Europe is heading down the same road that Greece has been traveling on for several years.

Today, Greece is essentially bankrupt and is experiencing a full-blown depression.  At this point, nobody in Europe is even pretending that Greece is going to be okay.  The following comes from a recent Der Spiegel article….

“With debts amounting to 150 percent of GNP, Greece is de facto bankrupt. Over the course of 2011, even the leading representatives of the euro zone finally accepted this fact — after having claimed its opposite a year previously.”

Greece desperately needs relief from all of this debt, but the other nations in the eurozone do not want to provide that relief.  Instead, it looks like Germany is going to ask private creditors to take an even bigger “haircut” on Greek debt than previously proposed.  The following comes from a recent Bloomberg article….

“Germany’s government declined to comment on a report that it may push for creditors to accept bigger losses on Greek debt than previously agreed upon, saying only that talks on lowering Greece’s debt level may end soon.

If Germany ends up publicly proposing this, it will shatter what confidence is left in European sovereign bonds.

There is not that much of a difference between a 75 percent haircut and a full default.  If investors are forced to take a 75 percent haircut on Greek debt, then the financial world will have to start wondering if it is just a matter of time before giant haircuts are proposed for Italian debt, Spanish debt, Portuguese debt and Irish debt as well.

Hopefully Germany will not be this stupid.

But something has to be done about Greece.  Right now the IMF is projecting that Greek debt will reach 200% of GDP at some point in 2012 if changes are not made.

Of course Greece could cut government spending even more, but the cuts that have already been made have pushed that country into a total economic nightmare.

In a recent article, I discussed how the brutal austerity measures that we have seen have plunged the economy of Greece into a full-blown depression….

Just look at what happened to Greece.  Greece was forced to raise taxes and implement brutal austerity measures.  That caused the economy to slow down and tax revenues to decline and so government debt figures did not improve as much as anticipated.  So Greece was forced to implement even more brutal austerity measures.  Well, that caused the economy to slow down even more and tax revenues declined again.  In Greece this cycle has been repeated several times and now Greece is experiencing a full-blown economic depression.  100,000 businesses have closed and a third of the population is living in poverty.  But now Germany and France intend to impose the “Greek solution” on the rest of Europe.

The “solution” that the EU and the IMF have imposed on Greece is not working.

So why are all of the other troubled nations in Europe being pushed down the same path?

Just consider the following statistics out of Greece….

*The unemployment rate for those under the age of 24 is 39 percent.

*The number of suicides has increased by 40 percent in the past year.

*Thefts and burglaries nearly doubled between 2007 and 2009.

Is that what we want to see throughout the rest of Europe?

The financial path that Europe is now on was criticized very harshly recently in the New York Times….

“Every government in Europe with the exception of Germany is bending over backwards to prove to the market that they won’t hesitate to do what it takes,” said Charles Wyplosz, a professor of economics at the Graduate Institute of Geneva. “We’re going straight into a wall with this kind of policy. It’s sheer madness.”

Yes, it is sheer madness.

Right now, authorities in Europe are desperately trying to keep a lid on this crisis.  The European Central Bank has been trying really hard to keep the yield on 10 year Italian bonds from rising above the very important 7 percent level.  But unless the ECB is prepared to spend hundreds and hundreds of billions of euros buying up Italian debt in 2012, the yield on Italian bonds is likely to go much higher eventually.

At this point, it is hard to find any economist that is optimistic about Europe or about the euro in 2012.

One of the leading economic think tanks in Europe, the Centre for Economics and Business Research, is extremely pessimistic about the future of the euro as we enter 2012….

In fact, they say that there is a 99 percent chance that the eurozone will break up within the next ten years.

Terry Smith, the chief executive of Tullett Prebon, recently used language that was even more apocalyptic….

“If the eurozone crisis could be solved by confident pronouncements, it would already be saved. I would be shocked if Greece does not leave the eurozone in 2012 and this does not lead the markets to test the resolve to defend the positions of Portugal, Spain, Italy and, ultimately, France.”

Yes, there are a whole lot of people out there saying that 2012 will be more difficult than 2011.

Fortunately, there are a few nations out there that are choosing to try some different things.

We aren’t hearing much about it in the United States, but right now Hungary is actually taking some measures to get their central bank under control.

The following comes from a recent article in the Telegraph….

Hungary passed laws for its central bank in a move that experts warned could jeopardise its chances of securing international bail-out funds if it needs them. Officials from the International Monetary Fund (IMF) have warned about the rules which will undermine the independence of the central bank. Hungarian prime minister Viktor Orban the country would not bow to the “European fashion that the central bank must be in a sacred state of independence”.

Of course the IMF is absolutely furious about this.  The IMF is warning that there will be no bailouts for Hungary if they mess with the “independence” of the central bank.

But hopefully more countries out there will start going after their central banks.  The truth is that it is the central banks and the endless debt spirals that they create that got us into this mess in the first place.

If central banking truly worked, Europe would not be in such a massive amount of trouble.  The euro would not be dropping like a rock and the European financial system would not be paralyzed by panic and fear.

The reality is that central banking does not work and it a colossal failure.

It is amazing that there is anyone out there that is still willing to defend central banking.

2012 is going to be one of the most interesting years that we have seen in a long, long time.

Yes, 2012 will be more difficult than 2011 was, but it will also be a great opportunity to wake people up.

Our world is changing faster than ever before, and the Internet has made it possible for average people such as you and I to significantly participate in that change.

Resolve to do what you can to make a difference in this world in 2012, because time is rapidly running out.

In 2012 the next polar reversal will take place on earth. This means that the North Pole will be changed...