A federal appeals court upheld an injunction against a voter-approved ban on Islamic law in Oklahoma on Tuesday, saying it likely violated the U.S. Constitution by discriminating against religion. 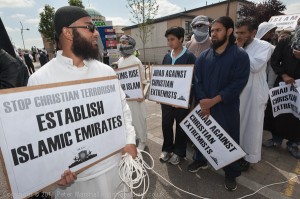 A three-member panel of the Denver-based U.S. Tenth Circuit Court of Appeals ruled unanimously that the rights of plaintiff Muneer Awad, a Muslim man living in Oklahoma City, likely would be violated if the ban on Sharia law takes effect.

The decision upholds the ruling of a lower federal court.

The Washington, D.C.-based Council on American-Islamic Relations welcomed the ruling, calling it “a victory for the Constitution and for the right of all Americans to freely practice their faith.”

Oklahoma’s “Save Our State Amendment,” which was approved by 70 percent of state voters in 2010, bars Oklahoma state courts from considering or using Sharia law.

The lawsuit challenging the measure was brought by the American Civil Liberties Union on behalf of Awad, who is director of the Oklahoma chapter of CAIR.

A federal judge in Oklahoma City issued a court order in November 2010 barring the measure from taking effect while the case is under review, finding a substantial likelihood that Awad would prevail on the merits.

The Council said the Oklahoma amendment is among 20 similar proposed laws introduced in state legislatures nationwide.

Defenders of the amendment say they want to prevent foreign laws in general, and Islamic Sharia law in particular, from overriding state or U.S. laws.

But foes of the Oklahoma measure, also called State Question 755, have argued that it stigmatizes Islam and its adherents and violates the U.S. Constitution’s First Amendment prohibition against the government favoring one religion over another.

State Senator Anthony Sykes, one of the measure’s sponsors, called the decision an attempt “to silence the voice of 70 percent of Oklahoma voters. At some point we have to decide whether this is a country of, by and for the judges, or of, by and for the people.”

Opponents also say it could nullify wills or legal contracts between Muslims because they incorporate by reference specific elements of Islamic prophetic traditions.

How can a federal appeals court can rule that an Oklahoma passed law that Sharia law cannot be used to settle disagreements is an unconstitutional law? Do we not operate under a set of laws created over the past 300 years? Why should we be using any other law whether it be foreign or religious law?

Should Catholics be afforded to have their suits settled by Catholic religious law? Or Jews, they have their own set of laws in the US as well, will they be allowed to use their laws?

This decision is a disaster in the making. No religious law or foreign law should supersede or be used to settle disagreements in the United States. We have our civil law system and it should be the only law that is used.

In Case You Missed It:  White House orders oil companies to fulfill "patriotic duty" by lowering gas prices and reducing profits (but Big Pharma and vaccine makers are never subjected to such demands)
Posted in Freedoms, Terrorism and tagged Islam, Muslims, United Socialist States of America.

Catholic Bishop to Gaza Christians: I asked prisoners in the largest prison to pray for you

Eight Catholic bishops from Europe and North America have just visited the Christian community in Gaza. The Vatican high profile...