The Treasury Department has begun maneuvers to avoid hitting the debt ceiling, as the Obama administration waits for Congress to return from the holiday break before it can raise the federal borrowing limit. 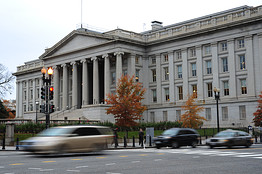 The U.S. government was just a hair below the $15.194 trillion debt ceiling on Tuesday, $25 million shy of the limit Congress set last summer. President Barack Obama sent a letter to congressional leaders Thursday, saying the U.S. debt was within $100 million of the ceiling “and that further borrowing is required to meet existing commitments.”

Raising the debt ceiling another $1.2 trillion is procedurally simple but politically it is much more complex due to the long term effects of such a move.

Last year, as part of the White House’s deal with Republicans to avert a potential default on the U.S. debt, both sides agreed to raise the debt ceiling $2.1 trillion, but to do it in two steps. So in August, they immediately raised the debt ceiling $900 billion.

To raise the ceiling another $1.2 trillion, which is what the Treasury Department now wants to do, Congress must first have the opportunity to formally disapprove or block the increase.

The vote of disapproval is expected to fail, but they need the opportunity to vote, which is something they can’t do while they are out of town. Congress has 15 days to vote to disapprove the increase once it is formally requested by the White House.

To be sure, Treasury Department officials, led by Mary Miller and others, have learned multiple ways to buy extra time while Congress deliberates during the near-scare last year. Suspending investments in the exchange-stabilization fund, a reserve account for foreign exchange purposes, is one of several things the agency can do to buy more time. If they need to buy even more time, they can suspend contributions to certain federal pension funds, among other things.

The practical implications of failing to raise the debt ceiling are almost as severe and letting the dbet continue to skyrocket. The government can only borrow money up to the limit, and because the government spends more money than it brings in through taxes and other receipts it is constantly running up the debt much like Greece has done.

Failing to raise the ceiling would mean the government would have to make severe cuts in spending to avoid defaulting on debt obligations. It appears the US is doomed with a run away debt and a deficit that clearly appears to be unstoppable. Only lies hold the eventual final collapse due to Washington’s failure to implement a budget and stop the uncontrollable debt.

Lawmakers are set to return later this month, though it’s unclear how soon a vote of disapproval could be held.

"I don’t blame white people for slavery – I blame blacks and Muslims for slavery!"  Ted Hayes contends that the...